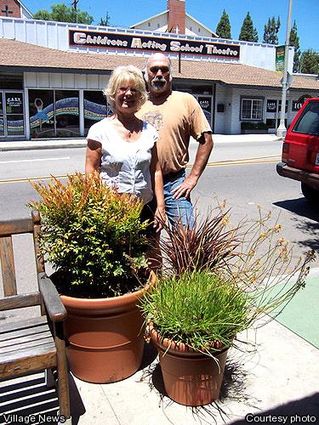 FALLBROOK — With the addition of the two blocks of beautiful flowerpots in the downtown area, the pleasures of a city garden can now be enjoyed from Fig to Ivy.

The 44 pots, funded by the Fallbrook Beautification Alliance (FBA), were put in place on Tuesday, June 17. “That brings the grand total to 118 planted pots to date,” said Judi Sanacore, also known as the “flowerpot lady.”

“In a town like Fallbrook, known for its beautiful green hills and avocado trees, the flowerpot project carries the country feeling into town,” said Sanacore.

Scott Spencer, a local landscape architect, has used similar plants to those he used in the previous four blocks.

Sanacore has had some help from Fallbrook Garden Club members, who have taken on the job of trimming the plants. The cost of placing, maintaining and watering each pot placed on the downtown streets is approximately $200. These funds are raised by the FBA through their annual Fourth of July spectacular held at the Grand Tradition.

At the other end of town, the Mission Road median is filled with flowering roses and beautiful foliage, also funded by the FBA. The hundreds of flowers are the result of the hard work of Pat McDougal, who delivered on her promise to the FBA that she would create the same kind of “wow” effect she has brought to the Grand Tradition over the years.

With the upcoming July 4 event at hand, the FBA is counting on community support, as this event is the organization’s only source of income.

“As an unincorporated community without a maintenance district, we have to do the work ourselves if we want a beautiful community,” said Jerri Patchett, president of the group.

Patchett asks those not attending the July 4 event to support the work of the FBA by buying a “Quack-Up Cup” race chance by picking up a form at Major Market or going online to http://www.fallbrookbeautification.org.

The race is a rubber ducky derby, part of the fun events at the festival, with great prizes starting with a $1,000 Savings Bond from 1st National Bank, a $500 Major Market gift certificate, $250 nursery certificates from Myrtle Creek Nursery and Santa Margarita Growers and $250 from Wee Little Sprouts children’s store.

Silent auction items are better than ever this year with the recent donation of a stunning 10.94 San Diego pink tourmaline stone from The Collector, the fine jewelry establishment on Live Oak Park Road.

Also, working with the county, the group has just finished a major cleanup of the creek that runs along the Pico Promenade.