For the love of SPAM 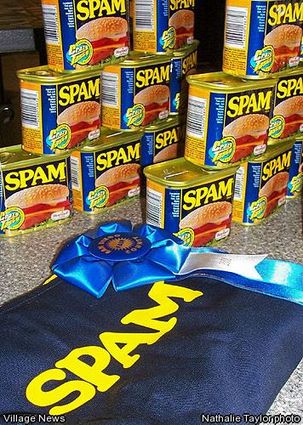 SPAM is one of those foods that you either love or hate. Many of the WWII soldiers who had it as one of their diet staples got really tired of it. Myself, I remember my mother frying it with scrambled eggs when I was young. She would also fry it and put it between two slices of bread with a little mayonnaise. Occasionally, I still indulge in fried SPAM sandwiches. For me, it falls into the category of “comfort food.”

Hormel Foods introduced SPAM to the world in 1937. Their Web site http://www.spam.com takes celebration of food to a new level. At first glance, you’ll see a SPAM can floating on clouds with rays of light emanating from the can like an aura. The site explains that Austin, Minnesota, is where Hormel Foods Corporation, makers of SPAM, is headquartered. It’s even nicknamed “SPAMtown USA.”

SPAM fans make the pilgrimage from near and far. It’s sort of like a Midwestern Delphi. At the headquarters visitors will find a 16,500-square-foot museum. “It is the very center of the SPAM universe,” states the museum’s Web site. “It is a necessary journey for anyone who loves canned meat.”

Local SPAM lovers had to settle for something a bit closer to home and converged at the San Diego County Fair on Saturday, June 28, for the Great American SPAM Championship. Thinking it would be fun to enter this contest and document my efforts, I embarked on a journey to make a culinary masterpiece out of SPAM.

The theme for the contest was “appetizers” and I entered what I thought were some fairly tasty ones. I layered water crackers with chive and onion crème cheese, a puree of fresh apricots and a “Hickory Smoked SPAM” concoction which was whirred in a food processor with a variety of spices, then pan-fried. I topped it all with a sun-dried tomato tapénade.

They tasted great before I stashed them in plastic containers, then set them in an ice chest for the journey to Del Mar. After being on ice for three hours, then on the table for another hour while the judges tasted their way across the room, the crackers had gone soft and my appetizers flopped. Of course, I didn’t realize this until I picked up my plate after the contest and took one mushy bite.

Another mistake I made was not to take the “presentation” portion of the criteria seriously enough. I assumed that setting my appetizers on a capiz shell platter given to me by a friend who purchased it from the Smithsonian would satisfy, if not exceed, the “presentation” expectations. Wrong.

The tables were overflowing with creatively presented SPAM concoctions: towers of SPAM decorated with spears of pineapple, platters dotted with fresh plumeria blossoms, SPAM sushi wrapped in green seaweed. One entry was cleverly displayed in a giant martini glass surrounded by Mardi Gras beads. It was clearly presentation with a capital “P.”

An anxious crowd milled about glancing at their watches as they waited for the judging to begin. The judges, decked out in blue and yellow SPAM aprons, had their pens poised and clipboards ready. It took them about an hour to judge the 39 entries. The criteria were: taste (45 percent), originality (30 percent) and presentation (25 percent). Also, all entries were required to be made with at least one 12-ounce can of SPAM and no more than ten ingredients.

Because it took the judges an hour to come to a decision, the waiting period was cleverly converted to a SPAM pep rally. SPAM beach balls were tossed around and people wearing SPAM t-shirts took turns at the microphone to tell their SPAM stories.

Prizes were awarded if you could think of a unique use for a SPAM can. One suggestion was to turn it into a purse and someone else suggested that it would make a dandy doorstop. The announcer shared SPAM trivia. I learned that in Hawaii you can order SPAM at a McDonalds or Burger King. I also learned that, if placed end to end, six billion cans of SPAM would circle the globe fifteen times.

The judges were serious about their duty and, after much deliberation, chose the winners. First to fifth place ribbons were awarded, with the first place winner advancing to a national competition. Sadly, I was not a part of the winner’s circle. 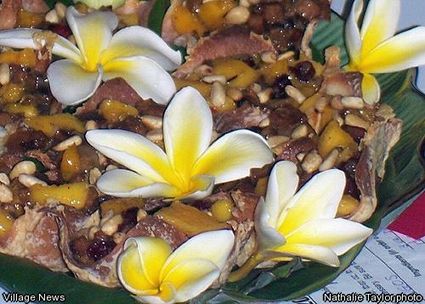 However, there was a bit of a redemption of sorts, when my “Why I like SPAM” essay was read by the announcer during the judging period and I was able to “take home the plastic.” I was awarded a SPAM-sized plastic container. Not exactly a blue ribbon, but a lot more useful.

My mother told me that next time she hosts a party she wants me to make my SPAM appetizers. I told her that I would probably never make them again – it took way too much time and created a horrendous kitchen disaster with apricot puree splattered all over the counter and fried SPAM scattered like sand on the stove. Besides, she and her friends would have to consume them immediately or else the crackers would go soft.