Hulk returns stronger than ever 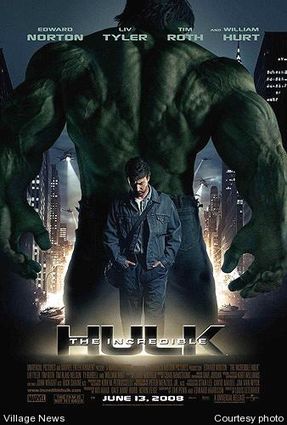 Marvel Enterprise has taken a second stab at bringing the Hulk franchise to the big screen with “The Incredible Hulk.” Unlike their first attempt in 2003 with “The Hulk,” this time around the story seeks validity with the fans by reusing elements from the early ’80s TV show of the same name.

The Hulk is one of Marvel Comics’ most well known superheroes, dating back to 1962 with the publishing of the comic “The Incredible Hulk #1.” The character is a sort of modern day synthesis of the Frankenstein monster, Dr. Jekyll and Mr. Hyde, with one side a physical manifestation of the fear of what the age of the atom bomb may bring and the other an analogy of the duality of man; the Hulk is born of science gone awry that transforms a scientist with a brilliant mind into a powerful beast with a childlike temper.

For 15 years “The Incredible Hulk” ran as a comic, finding fans amongst teenagers and college students, until the debut of the CBS television series in 1977, which brought the Hulk to mainstream America. CBS cast Bill Bixby as Bruce Banner and Lou Ferrigno as the Hulk and drastically diminished the emphasis of fantasy elements of the comic and focused more on the story of Banner fleeing the law for a crime he didn’t commit, desperately seeking a cure for his affliction. The episodes had strong humanistic overtones and the Hulk turned from fearsome animal into noble beast.

This was the Hulk audiences expected to see back in 2003 and didn’t. This is the Hulk Marvel knew it needed for film franchise to continue. And, I can safely say, this is the Hulk we got.

“The Incredible Hulk” is a fun, action-filled film which brings the story back to a fugitive on the run from the government, constantly fighting to supress the monster within him.

Marvel brought in some expensive talent: Edward Norton, Liv Tyler, William Hurt and Tim Roth – all well established actors. French director Louis Leterrier, of “The Transporter,” was given the task of shooting the film. The original screenplay was written by Zack Penn, who had previous experience writing for other Marvel films, but ended up with heavy editing by Norton himself.

The story begins in the same location where the 2003 film ended – Brazil – five years later, but this is the only similarity between the two films. Banner (Norton) moonlights as a technician for a soda bottling factory and spends his days training in martial arts to learn self-control over his emotions. An accident leaves a tell-trace sign of his gamma irradiated blood in a soda bottle and alerts his pursuers of his whereabouts. Forced to move again, Banner takes a desperate gamble to return to the States and search for a cure near his old home. Chance reunites him with his girlfriend, Betsy Ross (Tyler), and together they try to stay one step ahead of her obsessed father, the General (Hurt), and his psychopathic henchman (Roth).

Norton is known for playing characters with strong senses of duality, a.k.a. “Fight Club,” and is a believable Bruce Banner; however, Tyler is the scene stealer and gives the strongest performance during the film. I would almost say Hurt was miscast as General ‘Thunderbolt’ Ross, as the character is meant to be a strong, vindictive military man and Hurt usually plays softer roles, but he pulls the job off and perhaps gives the character a little more dimension.

The special effects are strong, though it is acutely evident that the Hulk is a computer generated (CG) character. However, this is always an issue when CG is shot against live scenes, so it’s forgivable.

Animation is top notch, with brutal fight scenes reminiscent of street brawls. The Hulk’s sense of unlimited strength is conveyed well, with characters using the entire environment to their advantage, as in one scene, the Hulk literally rips a car in two and uses the pieces to bludgeon an adversary.

The film is abundant with small details for the fans, with appearances by Marvel characters Doc Samson and the Leader. Ferrigno makes a cameo shot and is the voice of the Hulk the few times he does speak, something of a novelty, as Ferrigno was never allowed to speak when he played the title role during the TV series.

“The Incredible Hulk” is rated PG-13 and probably safe for all audiences, though I’d be hesitant to bring small children as some of the fights scenes are very intense.