Marijuana stronger than ever ... More potent dope than the hippies smoked... addictions in teens on the rise 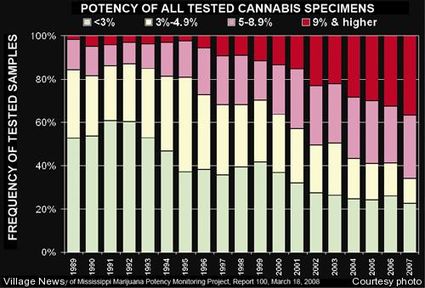 Potency of all tested cannabis specimens and frequency of tested samples.

Think marijuana is a harmless drug with insignificant effects?

A recent study into the psychoactive strength of marijuana was conducted by the University of Mississippi’s Potency Monitoring Project and the findings were released by the Office of National Drug Control Policy (ONDCP) and National Institute on Drug Abuse (NIDA).

The result of the study points to a sharp increase in the THC levels (psychoactive component) in the plant-based drug. These findings have raised concerns over the mental health effects on adolescents using marijuana.

“The potency of marijuana in the United States has doubled since the mid-1980s,” said Rafael Lemaitre, spokesperson for ONDCP.

In 1983 the THC level was just under four percent, but Lemaitre said the current samples indicate the level has swollen to 9.6 percent.

According to their most recent quarterly report, the University of Mississippi used marijuana samples obtained by law enforcement in the confiscation process. In one sample, the THC level registered 37.2 percent.

The THC level has risen due to different reasons, Lemaitre said.

“There are more sophisticated growing techniques used by drug traffickers,” he said, “and we also think there’s a concerted effort by drug gangs to take over the market share, because a better product has the higher potential for addiction and is better business for the bad guys.”

“Today, we are seeing more teenagers in treatment for marijuana addiction than for any other illegal drug, including alcohol,” he explained. “Marijuana is a different drug than what was around in the 1970s and we are seeing it as a very serious health threat.”

An adolescent brain, Lemaitre related, has not finished developing, so there is great concern about those smoking the drug with high THC levels.

“New research in the last four to five years shows troubling links between marijuana use and different kinds of psychosis, depression and schizophrenia,” he said.

Emergency rooms have seen their fair share of patients whose use of marijuana has led to paranoia, increased heart rate and panic/anxiety attacks.

A recent survey showed 17 percent of eleventh-graders in San Diego County admitted to using marijuana in the past 30 days. Nearly two-thirds of new marijuana users each year are between the ages of 12 and 17.

Fallbrook is far from exempt when it comes to marijuana use. The 2005 California Healthy Kids Survey conducted on Fallbrook youth revealed that six percent of ninth-graders and seven percent of eleventh-graders admitted to smoking marijuana.

“Marijuana is definitely present in Fallbrook, and young teenagers, even in our middle schools, are smoking it,” said Sgt. Theresa Adams-Hydar of the Sheriff’s Fallbrook Substation. “We have several arrests a week from Potter Junior High and Fallbrook High School for juveniles in possession of marijuana or some type of related paraphernalia.”

On Internet sites, such as MySpace and other file sharing sites, children frequently post photos of themselves smoking pot or using bongs (devices used to smoke marijuana), said Adams-Hydar.

Law enforcement officers recommend that parents closely monitor what their children are putting on sites like these, saying even the placing of a simple icon of a marijuana leaf on a personal site should be a red flag to parents.

“This is definitely something to watch out for,” said Adams-Hydar, adding that parents should also be vigilant about clothing lines that promote marijuana.

To keep abreast of any drug suspicious activity in children, it has been recommended by health experts that parents utilize home test kits which can detect drug use.

“We have a variety of tests,” said Kermit Harrison, pharmacy manager for Rite Aid’s Fallbrook store.

Results from one of these urine tests can be read within five minutes. If a positive result is discovered, Harrison says it is best to move forward with a blood test from a physician, just to be certain.

The sensitivity of home test kits is best utilized within 48 hours of any suspicious activity. “The farther out you go in time, the less reliable the test result,” explained Harrison.

On average, Rite Aid fields a couple of inquiries each week about home drug test kits. “I think these tests are a good threat for kids,” said Harrison, “and it will keep an honest kid honest.”

Due to the mild Mediterranean climate and fertile ground, Fallbrook is a top choice for many crops – including marijuana. Cultivators of the plant have been known to favor the greater Fallbrook area.

“There is a marijuana problem in any agricultural area throughout [San Diego County]; Fallbrook isn’t the only place,” said Sheriff’s Deputy Steve Reed. “Anytime you have an agricultural work group with remote areas and water, you’ll end up with marijuana.”

In 2007, Reed said the biggest marijuana growing operation his department busted was in the area of Palomar Mountain. Some 42,000 plants were being cultivated in the enterprise.

“On average, we find 100 to 500 marijuana plants,” he said, “and in the Fallbrook area, including De Luz, Rainbow and Bonsall, we find about 75 marijuana gardens a year.”

The cultivation of marijuana crops in the Fallbrook area is an ongoing problem. Unlawfully diverting water lines from law-abiding farms and orchards in order to irrigate marijuana gardens is common.

“It is easy to do so in the big ranches and farms of De Luz,” said Adams-Hydar. “If you see a water line going somewhere [other than your specific garden or orchard area], leave it alone and call the Sheriff’s Department.” 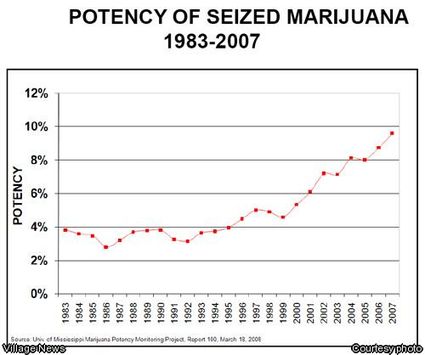 As far as the ONDCP is concerned, the marijuana of today is a new drug.

“There are people who have outdated thoughts and notions that marijuana is a harmless substance,” said Lemaitre, “but science is telling us something different.”

For more information about this subject, log on to http://www.theantidrug.com and http://www.WhiteHouseDrugPolicy.gov. To report any suspicious crop growth or waterline activity, call the Sheriff’s Department at (858) 616-4445.