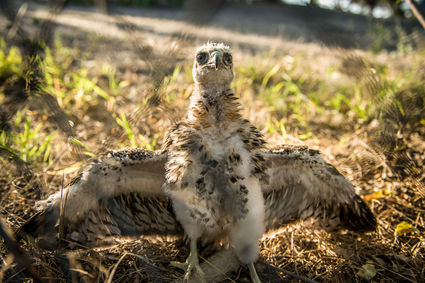 A nestling female Red-Tailed Hawk stands on the ground (on the other side of a fence) near the Seals home, screeching loudly like it is calling for help on June 3. . Ken Seals photos

In the evening hours of Wednesday, June 3, life at the Seals home in Fallbrook was its normal mix. It was 7:30 p.m. and Lauren Seals was relaxing and catching up on the news. Her husband, Ken, a photojournalist for the Village News, was reviewing images on his computer. That is until Hunter, the couple's dachshund, started barking in what Lauren called his "alert" way, indicating some type of "intruder" had his attention in the backyard.

"I went out back and saw a young bird on the ground just over our fence on some vacant land," explained Lauren. "It wasn't able to fly and I realized it must have fallen out of its nest and hopped down into the corner by our yard." The Seals home is located between Gum Tree Lane and East Mission Road.

"It was a baby Red-Tailed Hawk <a nestling>," Ken said. "It was screeching the way hawks do."

"What was amazing is that the bird didn't seem to be scared of the dog or us; we started thinking about what we should do," Lauren said.

"We could see it was just exhausted and since it was about a half hour before sunset, with coyote time approaching, I got two ladders and made a little bridge to get over the fence so I could climb over to capture the hawk," Ken said. "I threw a beach towel over it, wrapped it up and handed it to my wife, Lauren, who was on our side of the fence. The hawk made no effort to resist. To us, it appeared to be crying for help."

"This little bird touched something in Ken's heart," Lauren reflected. "It was very bewildered. It just looked at us like it was trying to say 'Will you be my Mother?'"

After placing the hawk inside Hunter's travel kennel, Lauren began reaching out on social media for suggestions. Based on recommendations, the couple phoned Mission Animal Hospital in Oceanside to see if it was able to receive nestling raptors.

"They said yes, so we took the hawk to them about 8 p.m. that evening," Ken said.

"When we arrived, we were met by a woman named Alexandra Gossett," Lauren said, adding that Gossett seemed delighted to see and help the little hawk.

A veterinarian at the hospital examined the hawk and determined it was in good shape, but dehydrated.

"They said they needed to start an IV to give it fluids so they could prepare to transition it to a wildlife rehabilitation center," Lauren explained.

Mission Animal Hospital started contacting wildlife rescue organizations in the region and it was The Funds for Animals Wildlife Center in Ramona that had room to take in the nestling.

Gina Taylor, a registered veterinary technician with The Funds for Animals Wildlife Center, said the facility is one of three organizations in the region that accepts and rehabilitates raptors for re-release into the wild.

"The first thing we did with this little female Red-Tailed Hawk was to do our own medical assessment," said Taylor. "Basically, what we learned was she was too young to be out of the nest. However, she was a very healthy orphan. In some cases we have to do x-rays, etc., but she did not need them. We just needed to focus on keeping her safe, feeding her the appropriate natural food, and monitor her until she was strong enough for release."

Taylor explained that one of the critical ways they monitor the health condition of wildlife is through tests on fecal matter.

"In doing that test, we determined she had the coccidia organism in her system, which is very common in young birds and mammals," said Taylor. Coccidia parasites usually invade the intestinal tract, but can affect the liver and kidney as well.

"We treated her with an oral medication to get rid of that, because it can threaten their health," said Taylor. "After four days of treatment, we re-tested her and it was successful; she was cured."

At the wildlife center, the little hawk had an easy life of rest and adequate nutrition for about five weeks.

"About halfway through her stay with us, on June 21, she was eating adult-level food and no longer had her baby feathers; she was able to transition to our large, outside aviary," said Taylor. "At that point, she started learning how to sustain flight. She continued to build strength and stamina."

Since she was progressing right on schedule, a date was to be set for the hawk's re-release into the wild.

"I got a phone call from Amy Smith at The Funds for Animals on July 11, saying our hawk was big enough to be released and they wanted to release it back into our neighborhood," Lauren said. "She also said our hawk had made a friend that was also mature enough to release at the same time." The second hawk had also come from local area.

The release was set for Thursday morning, July 16, at the Seals property.

"Under the law, we have to release the wildlife within 10 miles of where they were found," said Taylor. "It's important to put them back in their territory as it helps keep (nature's) balance and diversity."

Lauren said Smith was very accommodating because she and Ken wanted to film the release.

"She opened up the carrier our hawk was in and it was only on the ground 20 or 30 seconds; it looked around, took off, and flew up into a nearby tree," explained Lauren. "It surprised us all when a larger hawk immediately flew to the young hawk and appeared to be examining it. You could tell they knew each other. To us, it looked like a reunion. Was it mother and child? We'll never know, but they stayed together after that - flying to other trees."

When the "friend" hawk was released, the larger hawk didn't pay any attention to it, like there was no connection between them.

Since the release, Lauren said she has seen a larger hawk with a slightly smaller one on several occasions in the trees near their home. She thinks it may be the little hawk that they helped.

"We love birds," Lauren said. "We appreciate them for their beauty; we appreciate how they help us relax and connect with nature. Being part of the system of nature that is bigger than me, to put something back into that which would have been taken away from it, was very meaningful."

"For me, to be part of this was very emotional and very rewarding," Lauren said. "I felt like I was contributing back to the beauty that feeds my soul."

The Fund for Animals Wildlife Center

The Fund for Animals Wildlife Center in Ramona is a 13-acre facility that provides medical and rehabilitative care for native predatory species of wild mammals and birds.

A fully equipped medical center and trained staff and volunteers ensure that the special needs of ill, injured, or orphaned wildlife can be met year-round.

The hawk rescued by the Seals takes flight for the first time after its release back into the Fallbrook countryside.

In addition, the center also cares for nearly 40 full-time residents rescued from the exotic pet trade and other acts of cruelty.

The center is a non-profit that relies on dedicated volunteers and interns to ensure that all animals receive daily husbandry, enrichment, and the special treatments each patient may require during their rehabilitation program.

Volunteers and interns work alongside and learn from the devoted staff, which includes center director, Ali Crumpacker and other animal care professionals.

To learn more, or to make a donation, visit www.fundforanimals.org/wildlife-center.