Fallbrook dog will surf in Rose Parade on record-setting float 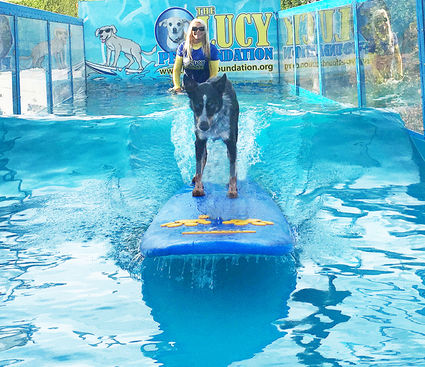 A dog from Fallbrook is among a very select group of canines that will be surfing in the 2017 Tournament of Roses parade in Pasadena Jan. 2 aboard Lucy Pet Products’ record-setting Gnarly Crankin’ K-9 wave maker float.

Fred, a 5-year-old dog owned by Al and Pat Erikson, earned a spot on the float when he impressed Lucy Pet Product officials with his surfing ability during an audition in San Diego and then won an on-line voting contest among the finalists.

Lucy Pet Products’ mobile wave making machine traveled nearly 30,000 miles this year so it could audition dogs from coast to coast. Fred was one of two dogs selected from the San Diego competition held in October.

“They had two tries on the wave machine,” said Pat, noting that Fred was making his debut on a wave machine. “You have your two go-rounds and then you’re done. You ask, ‘how’d he do?’ They say, ‘you’ll find out.’”

A little more than a week after the competition, the Eriksons found out Fred was a finalist. They then anxiously monitored on-line voting results to see if he was going to make the team for the Rose Parade.

“Fred was in the lead most of the time,” said Pat of the voting. “We posted it (the voting competition) on Friends of Fallbrook Facebook and a lot of people shared it. A lot of Fallbrook people voted for him. He finished first with close to 11,000 votes.”

“We have dog friends from all over the world that voted for him,” added Al, who along with Pat owns and operates the dog training facility Why Dogs Fly at their Fallbrook home.

The facility includes a dog sports field for agility training and an above ground, 41-feet long and four-foot deep swimming pool in which Fred first showed his fondness for surfing. The pool includes a dock for teaching dogs dock diving.

“We discovered Fred’s love of the surfboard while playing in our pool,” said Pat. “Fred would run down the dock, and if the board was in the pool, he would jump and land on it and surf the length of the pool. He turned into a board hog. From there we started going to the beach for Fred to surf the ocean.”

Pat, unbeknownst to her at the time, actually helped Fred train for his big opportunity on the wave making machine by playing with him in the pool.

“I would go in the pool and play with him and try to knock him off the surf board, but that was before this started,” said Pat.

Fred has an interesting profile.

“Fred is a McNab,” said Al. “It’s not a recognized breed but I know a lot of people that have them in the Frisbee dog world. They have similar traits to a lot of the other herding dogs, but they’re all a little bit different with how they approach things.”

The Eriksons have had Fred since he was a pup.

“He’s either all the way on – just going out of his mind – or he can just lay there and just kick back and snuggle,” said Al. “There doesn’t seem to be a middle ground.”

Fred’s favorite food is anything presented to him.

“He likes every kind of snack there is,” said Al. “He will work for food.”

Fred will have to work without Al’s guidance on Lucy Pet Products’ Gnarly Crankin’ K-9 wave maker float, which, being 125-feet long, will set a Guinness World Record as the longest float to ever be in the Rose Parade. On the float, Fred and the other dogs will surf down a wave and then get into a little car that takes them back to the top of the float, where they’ll repeat the process. Appointed trainers – not the dog’s owner – will work with the canines on the float.

“They’re going to put us up (in the Sheraton Pasadena) a week before the parade because they need the dogs to go up and practice,” said Al. “They want the dogs to get familiar with the float and the people. You have to practice this stuff.”

The Eriksons admit they’re a little anxious about how Fred will perform without his usual mentor (Al) being on the float with him.

“We’re a little nervous about that but I’m sure after a few days of practice he’ll be fine,” said.

“He’s a very confident dog, so I think he’ll be all right,” said Pat.

The Eriksons are also very excited about the trip.

“It should be a fun week with the practicing and the media and meeting all the other people,” said Al. “At some of the media things Fred will do a bunch of tricks and Frisbee stuff.”

“Fred has a busy schedule,” said Pat of the week’s itinerary.

Pat will be there for the fun leading up to the parade but won’t be in attendance on parade day because she had previously made plans to go to Hawaii with her sister.

“I had no idea this was going to happen – what are the chances?” asked Pat.

Turns out with a dog like Fred, the chances are pretty good. So, while Pat enjoys Hawaii, Al and Fred will enjoy their luxury digs in Pasadena.

“It will be the nicest hotel I’ve ever been in or Fred’s ever been in,” said Al. “We don’t do hotels much.”

Pat won't have any trouble finding the Rose Parade on television as it will be broadcast live beginning at 8 a.m. on multiple channels and networks, including ABC, NBC, Univision, Hallmark, and HGTV.