'Little Shop of Horrors' is a sensory delight 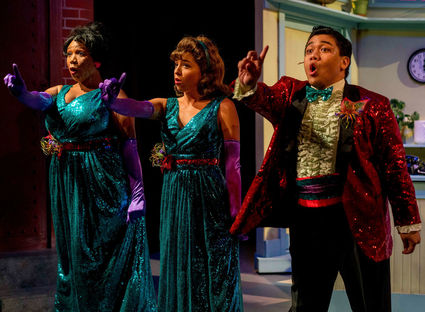 Quite often it can take a bit of tweaking to get something just right. And this time New Village Arts did! In his third directorial effort, A.J. Knox has a hit on his hands! "Little Shop of Horrors" is a visual delight as well as a musical triumph. As a matter of fact, many of the senses come to life in this show – even taste. (One must take into account when Audrey II begs Seymour to "feed me, feed me.")

Cumming's set design had to encapsulate Madison Mellon's vision as the puppet designer while working closely with costumer Amanda Quivey as she imagined Audrey II's (Eboni Muse) lavish costume to create a spectacular visual in the center of the little shop.

Couple all of that with the dance stylings of local song and dance man Kevin "Blax" Burroughs and ya get just the right amount of panache.

Along with all of the other sensory delights for this production, NVA has a wonderful music director in Benjamin Goniea. He has assembled some of the youngest talent in the area to round out the band like ninth grader Rex Lycan on drums, and Palomar High School junior Ron Lycan, Jr. on keyboards. They measure up to the more experienced players like Kyle Bayquen on bass, Andrew Snyder on guitar and Tony Houck working keyboards as conductor. Together they provide excellent accompaniment for the many vocals.

Which brings to mind the importance of Violet Ceja's work as sound designer along with David Romero on lights. Easy to overlook their excellence when done so well as in this case.

The campy story opens at Mushnik flower shop on skid row. Defeated after another day without a sale, zany Mrs. Mushnik (Melissa Fernandes) decides it's time to close the store. And it is this very decision that ignites the future for them all.

Coming forth is her man of all work, Seymour (Sittichai Chaiyahat). In a last-ditch effort to save his home and job, Seymour announces he has propagated a plant that will be the answer to all of their problems. He has even named it after co-worker Audrey, who he admires from afar. Seymour is a very convincing wimpy nerd filled with self-doubt.

Playing Seymour's love interest is Cashae Monya as the most desirable Audrey. Eccentric and adorable, Audrey knows only poverty and abuse. Even so she is quick to recognize someone's affluence, sighting they had a "fence of real chain link".

"Little Shop of Horrors" presented by New Village Arts in Carlsbad deserves to be seen and yes, heard.

It sets just the right tone of absurdity entwined with 1950's naïveté. The vocals are amazing. One is assured of a fun outing while supporting local theater.