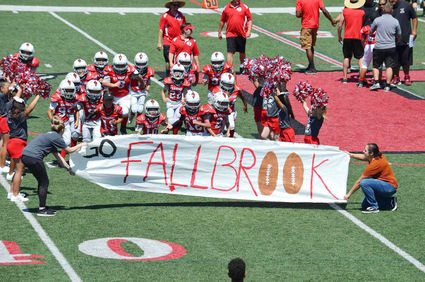 FALLBROOK – Fallbrook Pop Warner, Warrior football teams and cheer squads had their first games, Aug. 24. They played against some competitive teams and have been working these last two weeks to perfect their plays and passes and to strengthen their defensive line, according to their coaches.

The teams will have another weekend of home games to take on at Fallbrook High School Saturday, Sept. 7, while the 10U and flag teams will play out of town.

Over the season, Fallbrook Pop Warner invited the community to come out to support their players. They ask that residents follow the teams on social media and get current game schedules and scores on the Zorts sports app. There's no need to sign up, just request to be a fan and follow the Palomar Conference, Fallbrook League and one or all the teams in the drop down selection. 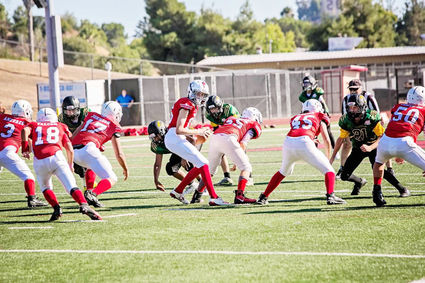 Fallbrook Pop Warner 14U Quarterback Sam Bruton (15) looks for his opening. On the line with him are, from left, Noah Anzures (3), Joseph Falcon (18), Quitin Johnson (17), Tank Benitez (55), Jayden Martin (45), James McAdoo Jones III (50), as they continued to fight against Temecula Attacking Grizzlies during their first game of the season, lead by their head coach L.T. Morgan.