Warriors varsity field hockey off to solid start to season 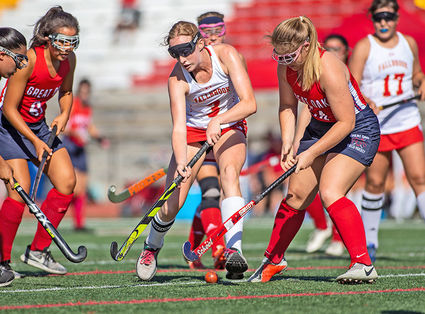 Hoping to turn the program around as quickly as possible, co-coaches Debbie Berg and Jeremiah Fuller have the Fallbrook High School varsity girls field hockey team aiming high in 2019.

"Our goal was, first of all, to have fun," Berg said in a phone interview. "We are picking up some pieces and restructuring because of a changeover in coaching.

"Of course our goal is to win, but also grow our players both mentally and physically, which we've done pretty well so far this year," Berg said.

They started the season with a 2-0 win over Great Oak High School at home and were scheduled to take on the Wolfpack again Wednesday, Sept. 25, in Temecula, after press time.

They followed that opening win with another against Vista High School, taking down the Panthers 2-1, again at home. The team suffered its first loss of the season dropping a nonleague contest to Mission Hills High School 3-2, but rebounded just a day later Sept. 6, with a 2-0 win over Point Loma High School.

They came back to win big over Mt. Carmel High School, 3-0, before dropping the game to San Marcos Saturday.

"We're Division II this year for the first time in many years," Berg said. "So, our goal is to win top honors in Division II."

The team is working with a mix of youth and experience.

"We have a little of both – a handful of experienced seniors and some freshman on the team," Berg said. "We have people stepping up to play different positions than they've played in the past and they are doing quite well this year."

Berg said they are a defensive-minded squad.

"We are pretty strong defensively," she said. "We have a very nice back line that has been able to offensive drives at bay."

Berg said senior captain and midfielder Erin Murray is leading the team in scoring – she's scored almost all the Warriors goals this season – and she's complemented by another senior captain, Jaylynn Leeman, in the midfield.

Berg said Jessica Gonzalez has stepped into the sweeper role having never played defense in the past.

"She's been a rock star back there," Berg said.