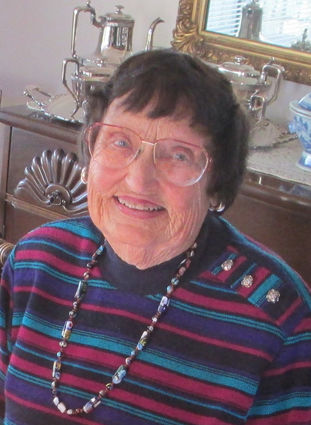 She grew up in the Phoenix area and went to William and Mary College before attending the University of Arizona in Tucson, Arizona, in the late 1940s. It was there that she met her future husband, Robert Wilson of Los Angeles.

They were married in Tucson, Arizona, in February 1952, and after living at the Goodyear Ranch outside of Phoenix for a while, they moved to California. Their sons, Craig and Britt, were born there.

Emily and her family eventually settled in the community of Eagle Rock. After retiring, Emily and her husband, Robert, moved to Fallbrook. They were active in clubs and meeting new friends.

Emily volunteered at the Angel Shop in Fallbrook and worked there until the end. She was active and driving up until her last days including holding memberships in Mayflower Society, Society of Colonial Dames, Delta Gamma and Daughters of the American Revolution.

Emily is survived by her husband, Robert, son Craig, his wife and their two children. She is also survived by son Britt and a great granddaughter. Emily was preceded in death by another grandson. She leaves behind numerous relatives including cousins, nieces and nephews in her native Phoenix area.

Emily was a remarkable and strong woman, who loved her family and husband dearly. She will be missed not only by her family but all those that she touched.