NCL honors the Class of 2020 Ticktockers 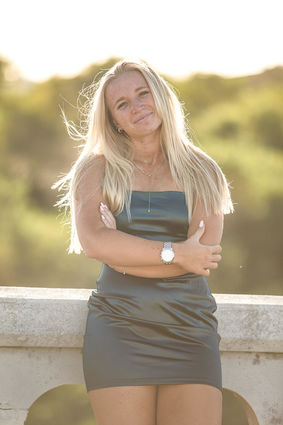 FALLBROOK – National Charity League, San Luis Rey Chapter would like to honor and recognize the graduating class of 2020 Ticktockers for their dedication and service to the community. This is the second of three groups of the seniors' portraits.

Megan Jean Janikowski is the daughter of Dan and Heather Janikowski and sister to older brother Dean and younger brother Jack. Megan Janikowski is a graduate of Cathedral Catholic High School. Her favorite philanthropy is helping at The Angel Shop. She and her mother love to clean, organize and search for hidden gems while helping this great organization.

Janikowski earned a letter three years in soccer, she ran cross-country for two years and played softball for two seasons. Her senior year soccer team was Western League Champions. She was team captain her senior year, and her team was Open Division CIF Champions.

Janikowski was an Options mentor at Cathedral Catholic High, a campus minister and a scholar athlete all four years. She loved working with the special needs students and deepening her faith through campus ministry. Janikowski is most passionate about helping others and enjoys being with her family and loves to surround herself with animals. She currently has dogs, cats, horses, chickens, doves, cockatiels and fish. She would have more animals if time permitted.

Starr Duvall Lang is the only daughter of Nicole and Robert Lang. She is a graduate of Mission Vista High School. Her favorite NCL memory is volunteering with her mother and their friends Nicole and Rosalie at the Angel Shop thrift store where they help organize and go through donations. Since freshman year of high school, Starr Lang has been studying American Sign Language and is now completing ASL 4 at Palomar College putting her on track to complete the American Sign Language interpreting program.

Along with being co-president of Mission Vista High School's ASL club, Lang is a member of both the National Honor Society and California Scholarship Federation chapters on her campus and is a member of her school's Catholics serving the Community Club. In the time left over from these activities, she is working to publish her book, "A Photo Anthology of Name Signs."

In the future, Lang hoped to graduate from a four-year university with her bachelor's degree in linguistics and apply for a master's program in speech and language pathology so that she can work to assist others in achieving and maintaining effective and fluent communication.

Gabriella "Ella" Rose Perko, is the daughter of David and Erica Perko and has an older brother, Alexander, and a younger sister, Leila, who is in the NCL class of 2021. Ella Perko is a graduate of Classical Academy, a Link Crew leader and involved in her school's Film Club. She is a competitive U.S. Synchronized Figure Skater with gold and bronze medals both in state and national levels.

Annually, Perko lobbies in Washington, advocating for better medical care for rare disease patients. Her favorite philanthropy is Solutions for Change. She loves decorating group homes at Christmas to prepare them for incoming families. She also looks back fondly on baking cookies with her mom and sister for New Haven and getting to know her NCL sisters.

In college, Perko plans to major in anthropology and she looks forward to traveling the world while working on digs as an archaeologist.

"Thank you to my family for everything you have ever done," she said. "Thank you, mom for pushing me outside of my comfort zone and believing I am capable of anything. I couldn't possibly have had a better life and I will forever be grateful."

"Offering a hand up is not a hand-out." Clara Barton, founder of the American Red Cross

Makaila Victoria Weber is the daughter of Bill and Charlene Weber and sister to brothers Lance and Nathan, and sisters Shawna and Maddy. Makaila Weber has been a member of NCL for six years and has spent many hours volunteering at a variety of philanthropic organizations. Her favorite philanthropy memories were serving dinner to many families at Solutions for Change, baking cookies for the Fallbrook Senior Center and making desserts for New Haven. 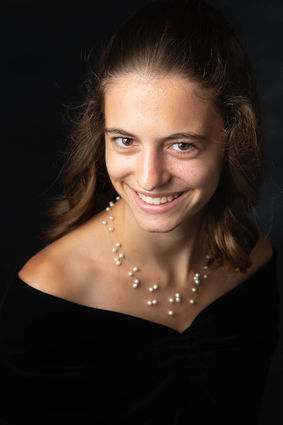 She has also served as a member of her school's National Honor Society. Weber graduated early from high school and is currently attending Palomar College to acquire her associate degree in biology before transferring to a university of her choice. She plans to earn a degree in biology and become a veterinarian.

Weber would like to thank her family for supporting her and pushing her to be the greatest she can be.