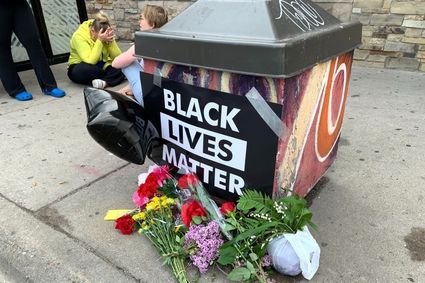 People gather around a makeshift memorial Tuesday, May 26, 2020, in Minneapolis, near where an black man was taken into police custody the day before who later died. The FBI and Minnesota agents are investigating the death of a black man in Minneapolis police custody after video from a bystander showed a white officer kneeling on his neck during his arrest as he pleaded that he couldn't breathe. (AP Photo/Jeff Baenen)

MINNEAPOLIS (AP) - A black man who died in police custody in Minneapolis was seen on a bystander's video pleading that he could not breathe as a white officer knelt on his neck during the arrest and kept his knee there for several minutes after the man stopped moving.

The death Monday night after a struggle with officers was under investigation by the FBI and state law enforcement authorities. It drew comparisons to the case of Eric Garner, an unarmed black man who died in 2014 in New York after he was placed in a chokehold by police and pleaded for his life, sa...