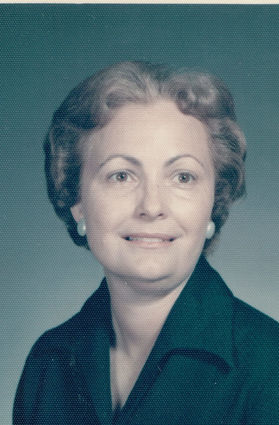 A private committal will be held in Riverside National Cemetery for Genevieve Nancy Sparks who passed away June 29, 2020, in Santa Cruz, at the age of 94.

Born March 31, 1926, in Altadena, California, Genevieve graduated from George Washington High School in Los Angeles in 1942 and received degrees in English and philosophy from the University of Southern California, where she was president of her sorority, Kappa Alpha Gamma.

She married Lt. Col William Franklin Sparks in 1946 and traveled to many distant places in her life. In Fallbrook, she was a beloved schoolteacher for many years. She was a charter member of the California Retired Teachers Association (CRTA), lifelong supporter of the American Association of University Women (AAUW), American Field Service (AFS) and the Fallbrook United Methodist Church.

She volunteered for Fallbrook Library's Bottom Shelf Bookstore and was a lifelong member of the Association of Research and Enlightenment (A.R.E.).

Upon her retirement in 1984, she and her husband continued their world traveling adventures. Many memories will forever be cherished of Genevieve's favorite family vacation spots, Hawaii and Carlsbad. Her husband, Lt. Col. William Sparks preceded her in death in April 1993.

Genevieve is survived by her children: William Sidney Sparks (Gretchen) Bellaire, Texas, and Janet Elizabeth Sparks of Capitola, California. She was preceded in death by her two sons: James Willard Sparks and Theodore Jeffrey Sparks of Fallbrook and brother Sidney Small of Cary, North Carolina.

She will be laid to rest in a private ceremony beside her late husband at Riverside National Cemetery. Kind acts of charity can be made in her memory to Fallbrook United Methodist Church.