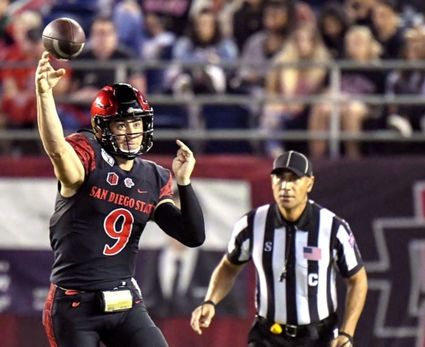 The Mountain West Conference, in which San Diego State University plays the majority of its intercollegiate sports, announced Monday, Aug. 10, it was postponing its fall sports season indefinitely in light of the ongoing COVID-19 pandemic.

The conference had announced Aug. 5 that it was planning to delay the start of conference games in multiple sports until after Sept. 26.

The Mountain West Board of Directors said in a statement Monday that it "prioritized the physical and mental health and well-being of the conference's student-athletes and overall campus communities'' in its decision.

"Nothing is more important than the health and well-being of our students, student-athletes, coaches, faculty, staff and overall communities,'' said Mary Papazian, president at San Jose State University and chair of the Mountain West board.

"Through the hard work of many over the past several months, the conference made every effort to create an opportunity for our student-athletes to compete, and we empathize with the disappointment this creates for everyone associated with our programs,'' she said. "The best interests of our students and student-athletes remain our focus and we will persist in our efforts to forge a viable and responsible path forward.''

The SDSU men's soccer team plays in the Pac-12 conference, which has not yet decided on fall sports. The Pac-12 CEO group, made up of one president or chancellor from each of the conference's 12 universities, were scheduled to meet Tuesday, Aug. 11, and is expected to discuss and vote on how to proceed with the 2020 football season. It is unclear at this time how that will impact other fall sports.

According to a Mountain West statement, there are ongoing discussions regarding the status of winter sports.

The SDSU Aztecs football team had modified its schedule to 10 games and most other fall sports were scheduled to only play conference opponents after last week's announcement.

"Since the start of the pandemic, our membership and staff have been working diligently to prepare for a fall sports season,'' said Mountain West Commissioner Craig Thompson. "We were hopeful we could carefully and responsibly conduct competition as originally scheduled with essential protocols in place. However, numerous external factors and unknowns outside our control made this difficult decision necessary.''