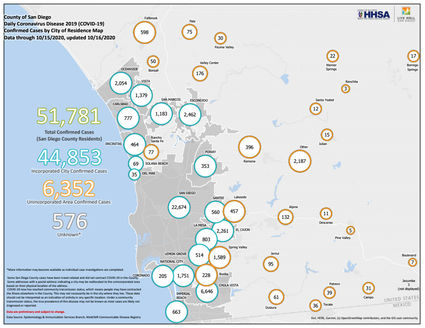 County Supervisor Nathan Fletcher and County Public Health Officer Dr. Wilma Wooten held an emergency meeting to ``sound the alarm'' as the future case rate appears to cross into the ``purple'' tier of the state's four-tier reopening system. The county is currently in the red, or substantial, tier for at least another two weeks.

The state's monitoring system features a seven day lag, both the adjusted and unadjusted case rate of COVID-19 tests returning positive for next

week look to be above seven new daily cases per 100,000 population -- the state's metric for the most restrictive purple tier.

The good news is that is will take two consecutive weeks with data in purple tier levels before the county is officially moved back to that step, so there may be a chance of reversing trends and avoiding that precipitous drop.

Nearly all non-essential indoor businesses would close under the purple tier.

``We are still in the red tier, but it is too close for comfort,'' Wooten said. ``We encourage teleworking as much as possible, and if you're sick, don't go into work.''

The California Department of Public Health will update the county's data next Tuesday.

``We do control our own destiny moving forward,'' Fletcher said.

Wooten said that 95% of the county's cases were not related to a marked community outbreak, a clear indicator that the illness has spread throughout the community.

A total of 17 new community outbreaks were reported Thursday -- 10 in business settings, three in restaurant/bar settings, two in faith-based institutions, one in a food processing setting and one in a restaurant.

In the past seven days, 47 community outbreaks were confirmed, well above the trigger of seven or more in a week's time. A community setting outbreak is defined as three or more COVID-19 cases in a setting and in people of different households over the past 14 days. The county uses outbreak to get a larger sense of the pandemic locally, but the state does not include the statistic in its weekly report.

On Thursday, the county reported 143 new COVID-19 infections and three virus-related deaths, raising the cumulative caseload to 51,470 and the number of fatalities to 847, amid a rise in confirmed community outbreaks.

One woman and two men died between Oct. 2-14, and their ages ranged from early 70s to late 80s. All had underlying medical conditions, according to the county Health & Human Services Agency.

Of the 8,315 tests reported Thursday, 2% returned positive, keeping the 14-day rolling average percentage of positive cases at 3%. The seven-day daily average of tests was 10,100.

To remain in the second tier of the four-tier COVID-19 reopening plan, the county must continue to have an adjusted case rate of less than 7.0 per 100,000 residents and a testing positivity percentage of less than 5%.

The county is preparing additional health and safety guidelines as the school year moves forward, county Public Health Officer Dr. Wilma Wooten said Wednesday. A survey of the San Diego County Office of Education found that of the 42 school districts, 27 are reopen to at least some students for in-person learning, six will open later this month, three have a target date of January 2021, one is looking for a start date in October or November and two are still determining a start date.

The metric will be used to determine how quickly a county may advance through the reopening plan.

To advance to the orange tier, the county would need to report a metric of less than 5.3%.

Neighborhoods are grouped and scored by census tracts on the Healthy Places Index, healthyplacesindex.org.