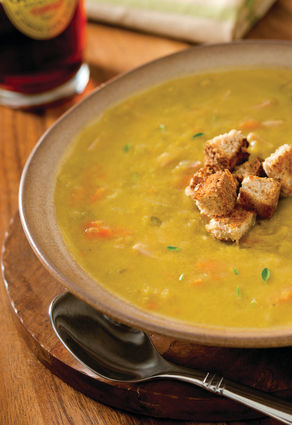 Adding chunks of ham to pea soup makes it a hearty meal.

The only problem having leftover ham after your holiday dinner is deciding which of several ways to use it for another delicious meal. My favorite use for bits of ham is on pizza, with pineapple of course.

When I was growing up, my mother made ham and potato casserole to stretch the leftovers, layering slices of potato with small pieces of ham and a flour-based sauce and baking it in the oven. It was a lot of work for her, but we all loved eating it.

For breakfast, choices for using up that leftover ham include mixing it into an omelet, quiche, frittata or breakfast burrito. Ham and cheese muffins can be an easy breakfast, part of lunch or as a tasty snack.

Ham can also be added to soups such as pea or navy bean; pasta salads; green salads such as Club salad; macaroni and cheese; quesadillas and wraps or used for kabobs with pineapple or your favorite vegetables.

Some people like to make a ham salad by chopping up ham or grinding it in their food processor, then adding mayonnaise or salad dressing, pickle relish, onions and chopped hard-boiled eggs. Some recipes call for mustard and some call for bell pepper. Ingredients can vary depending on one's preferences and the amounts depend on how much ham you have to use.

Ham salad can be eaten on crackers, in sandwiches or in cucumber boats. A recipe for the boats involves cutting the ends off a cucumber, cutting the skin off in strips then cutting it into three-quarter-inch pieces.

The inside of the cucumber pieces is scooped out with a small melon ball cutter. The resulting cup is filled with ham salad and topped with a small wedge of lemon – a fancy way to eat leftovers. The recipe didn't say what to do with the scooped-out cucumber, but I would chop it and add it to the ham salad.

Our family favorite is Mom's Ham and Potato Casserole.

In a 1 1/2 quart casserole dish sprayed with nonstick cooking spray, layer potatoes and ham, sprinkling flour over each layer and dotting it with butter then a little bit of salt and pepper. 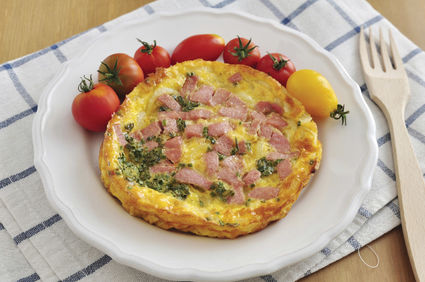 Leftover ham can easily be added to an omelet for additional protein and enhanced flavor.

Cover dish and bake for 15 minutes; pour the hot milk over the top to just cover the layers. Bake until potatoes are tender, removing cover for the last half-hour; total baking time is one hour.

This recipe serves six, but amounts can be adjusted for how big of a casserole you want to make. Minced onions can be added as well as other spices to suit each family's taste.

Recipes that include ham are plentiful in cookbooks or online if you would like to review many choices for using your holiday leftovers.

Note: This article was originally published in the Village News, Dec. 4, 2014.