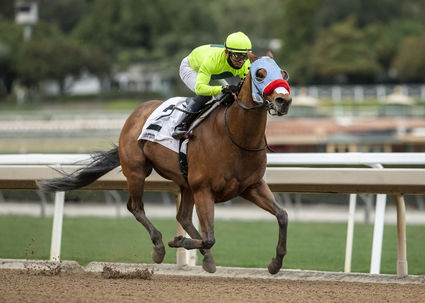 The Palos Verdes Stakes for 4-year-olds and upward was six furlongs on Santa Anita's dirt course. Wildman Jack won the race in 1:08.98 and finished 4 1/4 lengths ahead of Shashashakemeup, who crossed the finish line 1 3/4 lengths in front of third-place Pyron. Doug O'Neill is Wildman Jack's trainer and Peter Miller saddled Shashashakemeup.

"I'm just really proud of his efforts," O'Neill said of Wildman Jack. "Abel Cedillo gave him a wonderful trip, and when he called on him, he responded."

The Palos Verdes Stakes had Grade 2 status in 2020 when Captain Scotty, who is also trained by Miller and stabled at San Luis Rey, won the race as a 6-year-old. Captain Scotty and jockey Ricardo Gonzalez broke first out of the gate in this year's race. Cedillo and Wildman Jack broke third. Shashashakemeup was ridden by Juan Hernandez, and they broke sixth among the eight entries.

Captain Scotty completed the first quarter-mile in 22.01 seconds and was in the lead at that point. Wildman Jack was second, half a length in back of Captain Scotty and a length in front of third-place Shooters Shoot. Shashashakemeup was in sixth, trailing Captain Scotty by 2 3/4 lengths and fifth-place Kneedeepinsnow by a head.

Half a mile into the race, which took Captain Scotty 44.52 seconds, he still led Wildman Jack by half a length. Wildman Jack had a 2 1/2-length lead on Shashashakemeup, who had moved into third and was a head in front of fourth-place Shooters Shoot.

Wildman Jack entered the stretch 56.34 seconds into the race with the lead and a 2 1/2-length cushion over Captain Scotty, who was in second and two lengths in front of Shashashakemeup.

Captain Scotty finished fifth, 6 3/4 lengths behind Wildman Jack and half a length in back of fourth-place Ax Man.

The 4 1/4-length margin of victory was the second-largest in any of Wildman Jack's five career wins.

"We were very optimistic he'd run well, but we were beside ourselves seeing him run the way he did," O'Neill said.

The Beyer rating of a horse's performance reflects not only the horse's time and the distance of the race but also has standard and daily track conditions as factors and includes adjustments based on post position ease or difficulty. Wildman Jack had a Beyer rating of 104 in the Palos Verdes Stakes, which was the highest of his career.

The Palos Verdes Stakes was the 14th career start for Wildman Jack. His first two wins were at the Del Mar Thoroughbred Club as a 3-year-old when he was training at San Luis Rey.

"He definitely loved San Luis Rey. He swam a lot of laps there in that pool and enjoyed that beautiful setting there many times," O'Neill said.

O'Neill plans to give Wildman Jack some rest before entering him in another race.

"He's versatile, so he can run turf or dirt," O'Neill said. 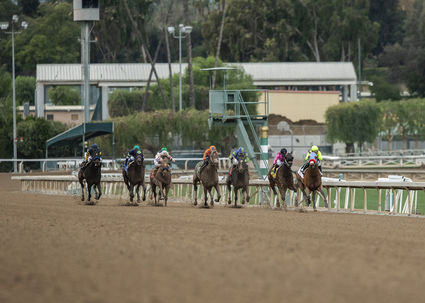 Shashashakemeup had been trained by J. Keith Desormeaux before an Oct. 28 claiming race at Churchill Downs in Louisville. Tom Kagele claimed the colt for $50,000 and placed him with Miller. Miller kept the colt at Churchill Downs for a Nov. 27 race which produced a second-place finish, and Shashashakemeup joined Miller's San Luis Rey stables in December. He had four timed workouts at San Luis Rey before the Palos Verdes Stakes. Second place in the Palos Verdes Stakes paid $40,000.

Captain Scotty, whose fifth-place finish was worth $4,000, raced once as a 3-year-old in 2017. That race was in Maryland, and Miller took over the training of Captain Scotty in 2018. Captain Scotty trains at San Luis Rey when he is not racing in the Eastern time zone.

Joe Naiman can be reached by email [email protected]