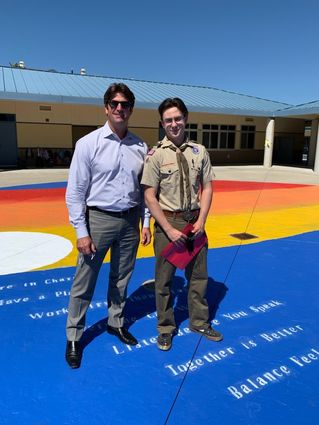 Former Bonsall West Elementary school student Colin Ericson began his Eagle Scout project April 2 by planning and installing a new mural at the elementary school based on the "Leader in Me" program.

A member of Troop 789, Ericson spent a total of 56 hours working on completing this project, and he also enlisted the help of multiple volunteers from Boy Scouts to help. The project took Ericson and his volunteers a total of 155 hours to complete.

After Ericson's former teacher, Sergio Guzman, approached him about doing his Eagle Scout project at the school, Ericson was determined to design...