As Cuomo exits, Hochul to take office minus 'distractions' 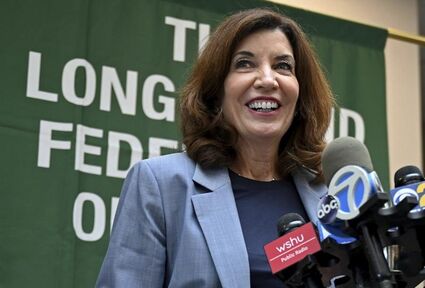 New York Lt. Gov. Kathy Hochul addresses the media after a meeting with Long Island labor leaders in Hauppauge, New York, Friday, Aug. 20. Hochul took over as governor of the state in a midnight transfer of power Monday, Aug. 23, following the resignation of Gov. Andrew Cuomo. (Danielle Silverman/Newsday via AP)

ALBANY, N.Y. (AP) – Andrew Cuomo neared the end of his decade as New York's governor Monday, Aug. 23, as he prepared to relinquish his tight grip on government to Lt. Gov. Kathy Hochul in a midnight power transfer that will break another glass ceiling for women in state politics.

Cuomo, a Democrat, was set to end his term at 11:59 p.m., just under two weeks after he announced he would resign rather than face a likely impeachment battle over sexual harassment allegations.

Hochul was scheduled to be sworn in as New York's first female governor ju...