"The only thing that matters to me is that she shows up, period" 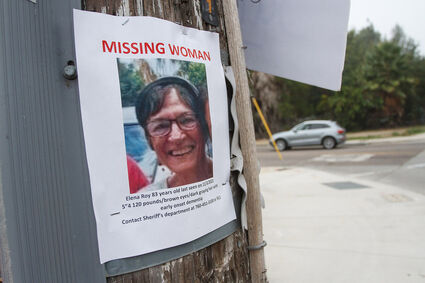 Missing Fallbrook woman Elena Roy's husband spoke to Village News in an exclusive interview Saturday, Nov. 6, pleading for the return of his wife who, as of press time, hadn't been seen since Wednesday, Nov. 3.

Roy, who disappeared between 1:30 and 1:45 p.m., is white, 5 feet, 4 inches tall and weighs about 120 pounds. She has graying dark hair and wears glasses and was wearing a white, light blue and dark blue top with dark pants, a silver and turquoise bangle bracelet and blue leather-soled shoes with flowers on them. She does have her purse with her, he said.

Roy's disappearance prompted a full-scale search with hundreds of volunteers taking to the streets, alleyways and even rural areas surrounding Fallbrook in an attempt to find her. As of press time, she remains missing.

Search and Rescue had about 60 people out looking for Roy according to her son, Jerry Swart.

"They had the helicopter out for two days along with drones and dogs," he said.

"I'm not sure the reason or if they are still looking," Arens said, adding that he wasn't "privy" to the investigation. "But yet Search and Rescue was out there for two days. I know they took today off. I don't know if they are regrouping to figure out where she might have went, or where to have the volunteers search."

Sgt. Jason Scroggins with the San Diego County Sheriff Department's Fallbrook station said that the call initially came into the department as a request for a deputy to call Cataldo, not as a missing person report at 8:17 p.m., Nov. 3.

"It was dispatched at 8:19 p.m.," Scroggins said. "When the call came in, it wasn't called in as a missing person, it was a request for a phone call from a deputy. ... It said, 'he did not want to enter his wife as a missing person at risk until he speaks to a deputy.' It came in as a phone request and a deputy called him; then at 8:50 p.m. it changed to a missing person. I don't know at what exact time the phone call was made (by the deputy)."

Scroggins said that there had been several calls to the department reporting possible sightings of Roy, but that none had turned out to be "fruitful."

"There was a similar looking lady in stature that was seen in different places and we spent some time tracking that down and we were able to ultimately determine it wasn't her," he said. "She was dressed similar, had a beanie on, so we had reason to believe that might have been Miss Roy but it wasn't and we were able to verify that."

Cataldo said the last time she disappeared, about a year ago, she did turn up before dusk."That didn't happen this time. As we got fairly close to dusk, I went out and looked for her," he said, adding that Roy is an avid walker.

He said the last time Roy disappeared, the people who found her took her to the sheriff's substation and that is what he thought would happen this time as well.

"Part of the problem is that she gets bored in Fallbrook, she does have incremental dementia," he said. "She can carry on a sparkling conversation with you; problem is, she can't tell you where she lives or her phone number or even how to get back here."

Private Investigator Tony Campbell talked to Eric from Fallbrook Auto Works, who is Roy's regular mechanic. He said he spotted her Wednesday on the east side of Main Street.

"Eric thought that was between 1 and 2 p.m. and she was headed north on Main Avenue," Campbell said. "He was 100% sure it was her. He did not know if she was carrying a purse."

Cataldo said he was unaware that Eric from Fallbrook Auto Works spotted her Wednesday on the east side of Main Street until later in the day.

Ross Curtis, an Allstate agent on Mission Road, reported to the Sheriff's department that he thought he saw Roy sitting on Beech Street next to the Citrus Plaza between 3 and 3:30 p.m. Thursday, Nov. 4. He said the Sheriff's department came out and also went inside the Citrus Plaza looking for her. "We have clients who get dementia and when you see a person that seems out of the ordinary, it catches your attention," Curtis said, adding that he thought he had seen her before. He has had clients with dementia who have shown up in his office five or six times a day, so he's worked with the families to make sure they are aware.

Due to Roy's dementia, "she doesn't like to be apart from me or left alone," Cataldo said, adding that, as like most dementia patients, she gets mad about the slightest thing.

Cataldo said that it was a recurring problem, but that she had promised that she wouldn't do it again.

Cataldo said that he called the police after searching for his wife and that it took some time for deputies to respond and then there was over an hour of questioning by police before he was finally able to notify the rest of the family.

He said the first thing after he finished with the police Wednesday night, he called Roy's daughter Jessica to let her know her mother had been missing for about seven hours.

Scroggins said that the police have "exhausted all available leads." He said police have searched "about a five-mile radius" around Roy's home and that at this point they are really relying on tips from the public.

"We are almost to the needle in the haystack stage of it where she could be anywhere. That's where we are relying on the community as a whole," he said. "We are getting it out on our social media and those types of things to have people who hopefully have seen something or remember something about her to give us an area to go search."

Scroggins said in addition to helicopters, drones and search and rescue dogs, rescuers are searching on foot as well.

"We had some people out in the DeLuz area yesterday (Sunday, Nov. 7) looking around," he said.

Scroggins encouraged residents to check any abandoned vehicles, any outdoor storage areas and around their property and anywhere that a person could possibly be for any signs Roy might have been there and to report anything suspicious to the police.

"We rely on the public and the community as a whole," he said. "Without the community support and participation there is a lot of stuff we can't do. We can't go into people's yards and places they can check for us. Who knows the property better than the property owner?"

Scroggins said that since Fallbrook is a rural community there are a lot of places where someone could be, without being detected.

"In some cases you could be 10 feet off the road and we would never see you unless you wanted to be seen," he said. "That's why we need the community and those property owners who are out there to be vigilant and if they see something that doesn't look right to call us. We'd rather chase 100 false sightings than miss the one that would lead us to recover Miss Roy and bring her home."

Cataldo, who said he misses his wife and just wants her home, said that he and Roy had grown closer over the pandemic. 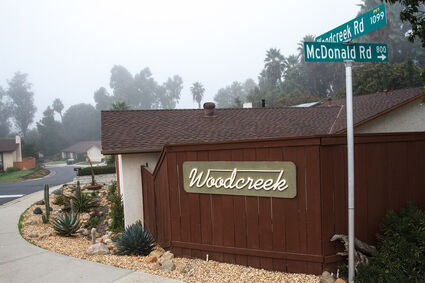 Elena Roy was last seen in the neighborhood of Woodcreek along McDonald Road in Fallbrook. Village News/Shane Gibson photo

Anyone with possible information about Roy's whereabouts should call the sheriff's department at 760-451-3100, or 911.

For the most recent updates on this story, visit http://www.villagenews.com.

Kim Harris can be reached by email at [email protected]