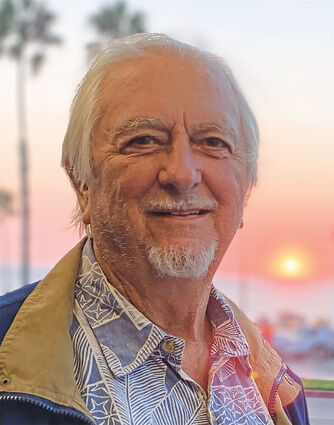 Robert Roy Helling, affectionately known as Bobby and eventually Bob, was born on April 5, 1934, in Rochester, New York to Arthur and Mary Helling. He died peacefully surrounded by his wife and all his children Jan. 19, 2022, at Temecula Valley Hospital.

Bob was the youngest of eight children. He spent much of his childhood fishing in ponds and hunting with his dog in the woods. At the age of 20, he moved to California to live with his brother, where he started working as a laborer in the construction field.

One day while visiting a buddy in Lincoln Heights, he was introduced to Rose Marie Scelso who was immediately smitten by his brand new Maroon '54 Pontiac Convertible. She soon discovered, however, that the car was a packaged deal with its owner.

Bob and Rose Marie married on June 25, 1955. They bought an 800 square foot house in Monterey Park where they raised seven children. Being a contractor, Bob completed multiple additions on the house until it finally landed at 3,300 square feet. His contracting business really took off following his decision to walk block after block in Monterey Park, where he left flyers on people's doorsteps promoting the replacement of asphalt driveways with concrete, a service he could provide. It didn't take long before he became a well-known and trusted general contractor in the city.

Bob and Rose Marie were very involved with their Catholic parish, Our Lady of the Miraculous Medal, in Montebello, California. All of their children attended Marian Elementary School, after which their daughters attended Sacred Heart of Mary High School and two of their three sons attended Cantwell High School.

In 1988, most of the family moved, en masse, to Fallbrook where Bob and Rose Marie purchased multiple acres at the top of a hill that has now become known as "The Hill" by most. Bob officially retired at the age of 40 but continued to wheel and deal in business ventures up to his last day. He and Rose Marie are respected members of the community of St. Peter the Apostle Parish and are well known and loved by many in the community of Fallbrook as well.

Bob and Rose Marie are known for being very generous, though none know this better than their family who they have treated to many adventurous vacations. In addition, they have always prioritized the needs of others by helping in any way possible.

Bob is survived by his wife, Rose Marie, and their seven children and their spouses, Valerie (Bob), Rob (Linda), Chris (Della), Julie (Al), Regina (Pete), Naomi (John) and Damian (Natalie), In addition they have been blessed with 31grandchildren and 22 great-grandchildren.

Funeral services will be Friday, Jan. 28, 2022, at St. Peter the Apostle Parish, 450 S. Stagecoach Lane, Fallbrook, at 1 p.m. In lieu of flowers please make a donation to your favorite charity.