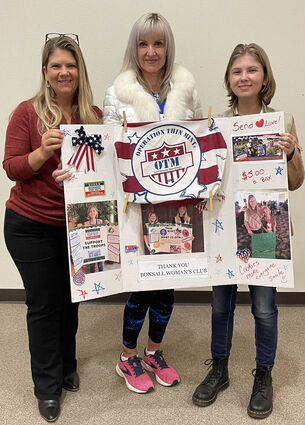 BONSALL – Operation Thin Mints is a Girl Scout service project where boxes of cookies are sent to military troops deployed around the world. The Bonsall Woman's Club participates in this program each year with the Girl Scouts.

Troop 7 is an active troop in Fallbrook/Bonsall and is considered a legacy troop, whereupon each graduating girl chooses a younger troop member to carry on Troop 7 and continue to serve their community.

The community is invited to support Girl Scout Troop 7 and the military by making an offering to them with a little touch of home goodness at $5 per box. No limit. Coordinating with the Girl Scouts, make checks payable to "Bonsall Woman's Club" and mail to P.O. Box 545, Bonsall, CA 92003. In the memo section write either OTM or Girl Scouts.