Theatre Talk from 'Memphis, The Musical' 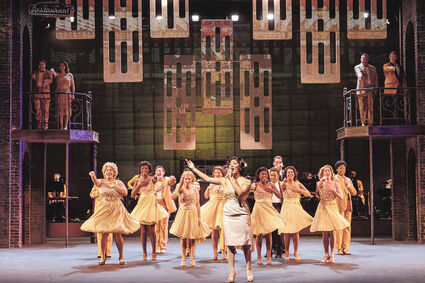 Janaya Mahealani Jones as Felicia, center, performs with the company in "Memphis, The Musical" at the Moonlight Amphitheater. Village News/Karli Cadel photo

I am sad. I really, really, really wanted to love this show. Who wouldn't be excited to see the musical that shoved "Million Dollar Quartet" over to win the Tony Award in 2010 as Best Musical?

I counted on this being a stellar show. Just the word "Memphis" conjures all sorts of cool stuff like the blues, barbeque, B.B. King, Al Green, Carl Perkins, Jerry Lee Lewis, Johnny Cash and, of course, the home of The King, Elvis Presley.

Opening night at, "Memphis, The Musical" was a dud. And the blame sits squarely on the shoulders of director Jeffery Polk, where it belongs. Naturally, I had to look up his bio. And, as I suspected, Mr. Polk has never traveled further south than Sepulveda Boulevard, until this assignment. He comes with the creds, but they just didn't play out. This production missed the mark from the get-go.

First, the opening night curtain was 11 minutes late. (Mr. Polk shows no respect for the audience when he can't get the lights up on time.) Second, the set was drab and ugly. Third, the costumes were ill fitting, drab and ugly; there is nothing about this production that will lighten anyone's heart unless Kevin "Blax" Burroughs re-choreographs the dances. Furthermore, let Jennifer Edwards turn on the lights because the cast was lost in the under-lit stage.

It is also a pity that a voice coach was not employed to teach this California cast to speak with a Southern drawl.

To add insult, Huey Calhoun (Bryan Banville) presented his character as a whiney, nasally goofball. Not a cool redneck D.J.

And, hello, by the way, Gladys (Morgan Carberry), his redneck mother, would have unmanned her son if he ever wore a hat indoors let alone sat at her kitchen table. That's how a redneck woman would behave in the 1950's.

This show was not the actors' fault. It was all about bad direction.

Those who stood out included Janaya Mahealani Jones as Felecia. She is a terrific singer. Her character was superb. I also really liked Shaun T. Evans who played her brother Delray and Marqell Edward Clayton as Gator was a standout favorite.

I've also seen Marisa Moenho in "Hairspray" and Joy Newbegin at the Moonlight; Greg Nicholas is a local favorite; Kamari Small is back after a run in "Beauty and the Beast" last year. Of course, E.Y. Washington and John Wells III are local singers/dancers that often grace our San Diego stages.

The new-to-me faces like Justin Lunsford, Darrand Hall, Kalin Booker, and Kiana Baylor really didn't get a chance to shine because, to me, it seemed like the lights were out.

What should have been a fabulous show fell short. Mr. Polk might rethink trying to choreograph and direct a show of this magnitude at this level.

"Memphis, The Musical" will run until May 28 at the Moonlight Amphitheater in Vista. For tickets call 760-724-2110 or visit https://www.moonlightstage.com/shows-tickets/memphis. I for one would consider waiting for Rodgers and Hammerstein's, "Cinderella" coming June 8. "Memphis, The Musical" is rated 6 out of 10.