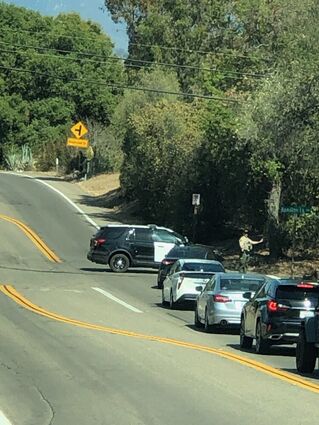 Traffic is being diverted on E.Mission down Hamilton Lane to Gum Tree and out at Live Oak Park Rd back to E. Mission.

FALLBROOK – On Tuesday, Aug. 16, at approximately 3:40 p.m., a 63-year-old male from Escondido was riding a red Honda CTX motorcycle in the eastbound lane of East Mission Road, east of Via Zancas. For reasons still under investigation, the 63-year-old male lost control of his motorcycle and was ejected into the westbound traffic lanes where the rider collided into a white Mercedes C250.

The California Highway Patrol, San Diego County Sheriff’s and the North County Fire paramedics responded to the scene to assist the rider. The rider was transported by ambulance to a local area hospital where he was later pronounced deceased.

The roadway was affected from the time of the collision until approximately 04:40 p.m., as the scene was investigated. Alcohol and/or drugs are not suspected to have contributed to the cause of this traffic collision.

The investigation is ongoing, and the CHP is asking anyone who has information or may have witnessed this incident to contact the Oceanside Area CHP office at 760-643-3400.

UPDATE: According to NCFPD, the motorcyclist was pronounced at the hospital.

A motorcycle accident has left the rider in CPR status and he has been transported to the hospital, according to NCFPD John Choi.

North County Fire was requesting everyone take an alternative route in the area of 2500 block of East Mission Rd near Hamilton Lane in Fallbrook but an update is that lanes should be clear.