Hollywood Outdoor Movies is bringing back the drive-in 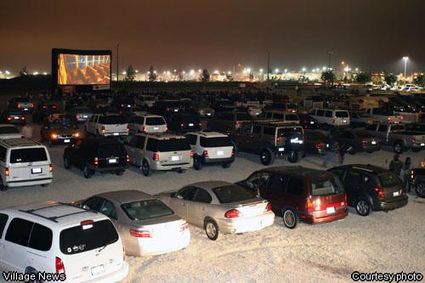 The Hollywood Outdoor Movie can set up a screen to mimic a drive-in.

If you grew up anytime before about 1980 chances are you experienced what it was like to see a drive-in movie.

John Snyder of Fallbrook said that he has done some research and discovered that, since the early 1980s, the majority of California’s drive-ins have closed. However, if you enjoyed the drive-in experience or viewing a movie outdoors with friends and family, read on.

Snyder’s business, Hollywood Outdoor Movies, will set up an inflatable screen in various venues, including parking lots. These ready-made drive-ins are causing a stir all over Southern California and his new business has really ballooned.

The staff wears ’50s attire to send you down memory lane and their motto is “Putting Nostalgia Back into America.”

My memories of the drive-in are still vivid. Being raised in the San Francisco Bay Area we had fairly good weather all year, which was perfect for the drive-in experience. As a teenager, we would sit on the car hoods with our backs to the windshields to view the movie.

Snyder and his staff mimic this fun and communal atmosphere and will set up screens for cars as well as for chairs. “People love it,” he commented.

Most of the events are BYOC (bring your own chair), said Snyder. However, the company will provide chairs, up to 400, for an additional charge.

“We can do as little or as much as a client wants us to do,” said Snyder. The company also sells glow items, such as necklaces, and will provide snacks if the client is interested.

The inflatable screens that Snyder uses are made by the Airscreen company and are from 16 feet to 100 feet wide. His motto is “Do it right the first time!”

Initially, Snyder spent a lot of time on research to find the best products. “The screens are made by the same company that provided screens for the Munich Olympics,” he noted. They also use the same screen material on the inflatable as is in use at the indoor theaters.

The projection systems have a high lumen count, which provides crisp, clear pictures. The sound is also top quality.

“We spend a lot of time and energy in giving customers the absolute best show possible,” said Snyder. 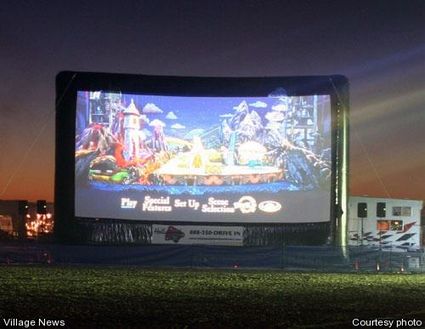 The large screens can be set up in a variety of venues.

Why did he start this service? “I think that people don’t get out and socialize like they used to anymore, and it’s fun – the best thing about it is that it is fun.”

Most of the showings take place between April and October. Hollywood Outdoor Movies will set up screens anywhere in California, but the majority of their clients live in Southern California.

“Our goal is not just to make a quick buck – we want our clients to come back. It’s not just about making money, but about helping people enjoy their lives.”