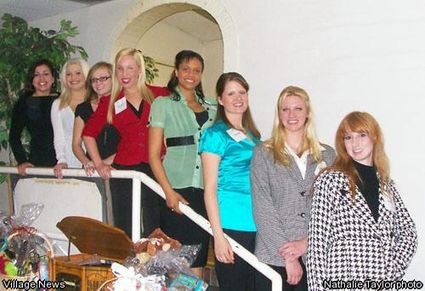 As part of a new focus for the 2008 Miss Fallbrook Pageant, the candidates participated in a fundraiser for the Fallbrook Animal Sanctuary.

The event, which was held on Saturday, February 23, at the Fallbrook Veterans of Foreign Wars (VFW) hall, included a dinner, entertainment, raffle and silent auction.

The fundraiser was so well attended that the hosts had to set up an extra table.

“We want the girls to become involved in community affairs,” said Patricia Harrison, coordinator of the fundraiser and also director of the Soroptimist-sponsored Miss Fallbrook Pageant. “We want this to be the ‘Year of Community Awareness.’”

This theme goes hand in hand with the Soroptimists’ efforts to serve the community.

The pageant judges are going to have a very difficult time deciding on a winner because all contestants possessed beauty as well as a willingness to serve in whatever capacity was necessary.

Lined up at the kitchen waiting for dinner plates, the girls took turns buzzing around the room serving dinner to the guests. They also took part in delivering prizes to the raffle and silent auction winners.

Diners stopped visiting with each other for a few minutes while the Miss Fallbrook contestants stepped up to the microphone and, one by one, introduced themselves.

The evening’s entertainment was graciously provided by a soloist who goes by the name Pattric accompanied by Gene DeValle on the keyboard.

The dinner consisted of a green salad, Chicken Parmigiana, spaghetti and meatballs and a wonderful dessert. Patricia Harrison and her crew in the kitchen spent hours in food preparation.

Janet LuCore, founder of the Fallbrook Animal Sanctuary, said that the organization has been in existence since June of 2002.

The effort began as just a friend helping friend endeavor with a group of people who wanted to provide assistance to their animal friends in need.

“We take in homeless and stray abandoned animals and rehabilitate them and re-home them,” LuCore explained.

The service is confined to the dog and cat population.

“People call if they find an animal or if they have a family member die and no one can take their animal,” LuCore said. “We get them healthy and vaccinate them.”

The facility recently relocated to east of I-15 between Fallbrook and Escondido, where they have temporary housing for 100 cats and six dogs. The majority of their dogs are in foster homes.

“Forty cats returned to that area after the fire,” said LuCore. 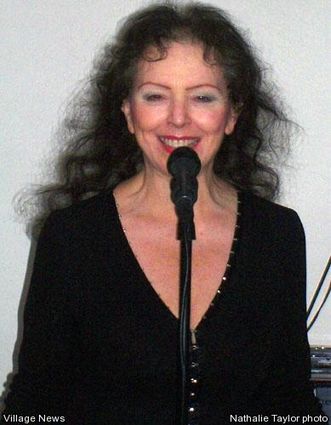 Singer Pattric donated her time for the evening

The owners who were reunited with their cats were “all very grateful and amazed that they found their cats,” said LuCore. “These people lost everything, so when they found an animal it was very emotional. I was so glad that we could do it and so glad we had the facility to do it.”

The group is having some zoning problems at present, but it is not putting a damper on their spirits.

“We just have to make a go of it. It is too needed,” said LuCore. That very fact was proven over and over again in the aftermath of the fires.