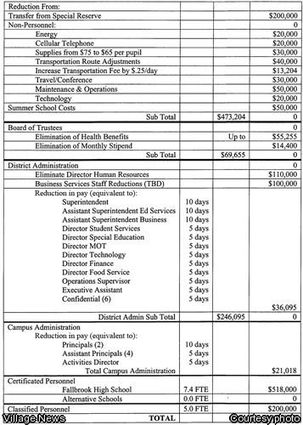 Despite pleas from representatives of the classified staff union and one teacher, the Fallbrook Union High School District Board approved $1,527,972 in budget cuts on Monday night, February 25, that included the elimination of seven and one-quarter teaching positions and five classified personnel.

With board member Marc Steffler still looking for ways to cut non-personnel expenses and board member Mike Schulte suggesting that teacher and classified cuts be deeper in an effort to prepare for the future, after 45 minutes of debate, the board reluctantly voted to adopt the budget cuts as proposed by interim Superintendent Dr. Robert L. French. By law, the budget must be adopted by March 15.

Stepping up to the plate to share in the pain, the board members also agreed to eliminate their own health benefits and monthly stipends, a combined savings of $69,655. Since this particular cut will require a change in the bylaws, this vote was pushed forward to the next board meeting to allow the bylaw changes to be drafted.

The mood was somber. “Every child will be affected,” said board president Bill O’Connor.

In response to questions from the board regarding the thoroughness of the research for the proposed revised budget, French said he received some 200 recommendations for ways to cut the budget, in writing or in person, and considered them all at least three times.

“A lot of effort took place to come up with this recommendation,” O’Connor said.

“We owe it to the teachers, the community and the kids to be fiscally responsible,” said Schulte.

“These are people we care about. [They] are tough decisions,” Steffler added.

For Steffler, Schulte and O’Connor – the three newest board members, who voted in December to spend close to $400,000 of the district’s funds to buyout Superintendent Tom Anthony’s contract three years early – some critics could take the view that the decision was at the expense of 5.7 teachers ($399,000), or all five classified positions ($200,000) and 2.85 teaching positions ($199,500), now that the budget had to be adjusted due to declining enrollment and deep cuts in state funding.

French said the district would continue to seek ways to reduce costs, citing as a recent example the school irrigation system that was reprogrammed to use less water. Further, board member Lynn Colburn said he was looking at a method of managing the school’s benefits which might result in cost savings.

While no board member was pleased with the proposed budget, Chet Gannett, assistant superintendent in charge of business services, warned that the California Legislative Analysts office is now predicting a $16 billion, instead of $14 billion, deficit for the 2008-2009 year.

“As bad as the news is now, it could be worse,” Gannett said.