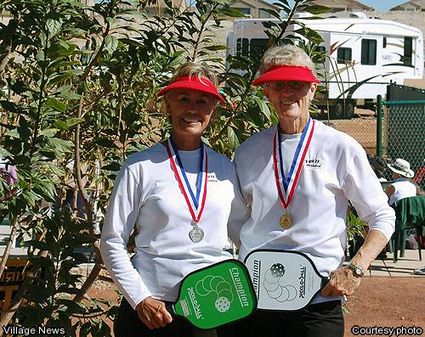 The 21st Huntsman World Senior Games were held in October in St. George, UT, where more than 10,000 athletes from all over the world converged.

“It is one of the most inspirational events we attend,” said Beverly. “This year there was one competitor, 101 years old, who competed in golf. Amazingly enough, this was the first year he had to take a cart; other years he walked the course! He was escorted to the podium by his 80-year-old son, also a competitor. This is just one special memory. Our oldest Pickleball competitors were 85.”

The 25th Arizona Senior Olympics, held in February, is one of the largest tournaments. Beverly teamed with Pat Carroll for women’s doubles. Bob’s partner for men’s doubles was Barry Ford, a resident of Sun City Grand, AZ. Bev and Bob played mixed doubles in the 60-64 age bracket. They all brought home medals.

During their stay in Arizona each winter, Bob gives weekly classes for players and seminars for new Pickleball teachers.

“Pickleball has grown tremendously in the last few years and we see how the level of this sport has dramatically increased at the tournaments,” explained Bob. 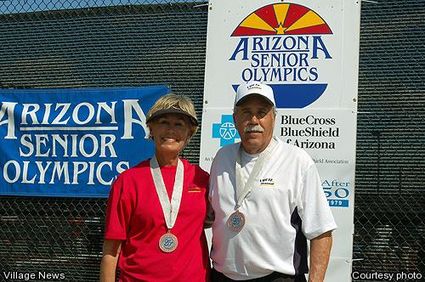 At the recent Pickleball Rodeo at Happy Trails in Surprise, AZ, an event that they organized, 20 states plus Canada were represented.

They are eager to share their passion for Pickleball. Drop-in play is available at San Luis Rey Downs Tennis Club every Wednesday and Saturday mornings at 9 a.m. Extra paddles are available for new players.