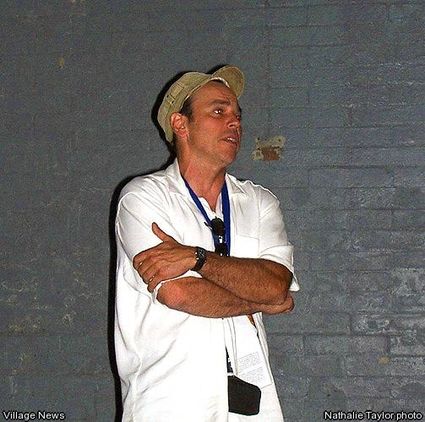 Duffy Hudson, co-producer, writer and an actor in

“Tattered Angel” is a film that is electric with suspense, but it is also a film with a mission. The piece highlights the plight of missing children; and is a dramatic and believable tool that is not only used to entertain but to educate.

The viewer feels the agony of the schoolteacher who forgot to check her student list and consequently left one behind. The viewer also experiences the tortured guilt of Vince who was unable to save his sister from abduction 22 years in the past. She haunts him throughout the film in the form of hallucinations and memories. Vince, portrayed by the film’s writer and co-producer, Duffy Hudson, returns to his hometown where he is the last person to see 10-year-old Ellen before she disappears.

Complicated emotions come into play when Vince begins to remember his own sister’s abduction. Partially motivated by his haunting guilt over not being able to help his sister, Vince embarks on his own search for the missing girl. Because he was the last known person to see Ellen he has become of interest to the local police and others.

In Vince, Hudson creates a character that you hope throughout the film is innocent of any wrongdoing. However, circumstantial evidence is piled high against him and, therefore, he is the brunt of a vicious attack. Hudson admitted that he took some real punches for the sake of his art. The film illustrates the harm that can be caused by the snowball effect of unsubstantiated accusations perpetrated by those who have an agenda of their own.

The filmmakers classify “Tattered Angel” as a psychological drama. The National Center for Missing and Exploited Children was of great help to Hudson during the filming. With a talented and experienced cast Hudson weaves a tale of suspense that leaves the viewer with no room to breathe.

The film also features Lynda Carter of “Wonder Woman” fame, who plays Ellen’s mother. She plays the part so well that the viewer feels as if he or she has stepped secretly into a mother’s own private agony.

Kirk Baltz plays Detective Ben Miller, who is suspicious of Vince. Baltz is no stranger to action films or crime drama, having enjoyed a long career. He is probably most recognized for his role in “Reservoir Dogs.”

Ellen disappears while in the charge of schoolteacher, Julie, who is adeptly portrayed by Susan Floyd. Floyd, known for her many roles in various television shows, got her start on “One Life to Live.”

“Tattered Angels” was an official selection for nine film festivals throughout the country. It won Best Feature at the Appalachian Film Festival and took the Grand Jury Award at the New Strand Film Festival.

In a question-and-answer session at the Mission Theatre after the screening, Hudson told the audience that the inspiration behind the film came from a dream. The one-hour, 35-minute film was shot in the Cincinnati area in just 26 days. However, they were 18-hour days, according to Hudson.

This film is gripping. It is believable. It is a film that needs to be seen around the world.