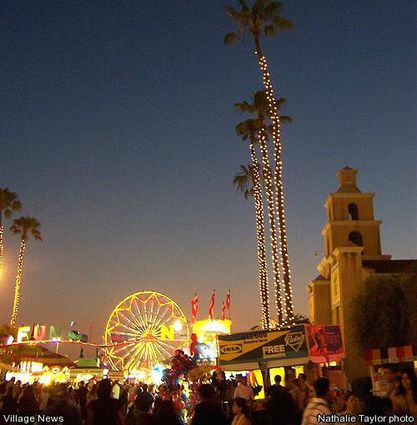 The fairgrounds are beautifully lit at night.

On June 14 the Del Mar Fairgrounds will be electric with the sound of swirling rides, baaing sheep and the excited screams of gleeful children. The unmistakable fair scent of kettle corn, corn dogs and cotton candy will drift through the air as the San Diego County Fair opens with its “Summer of Sports” theme.

The theme exhibit will highlight sports history and offer interactive exhibits. Several renowned athletes and sports figures will make appearances, among them Baseball Hall of Famer Tony Gwynn and Shawne Merriman of the Chargers. Merriman is scheduled to appear on June 15. Meet some of the other Chargers on San Diego Chargers Day, Friday, June 20.

There will be some new experiences on the menu this year. A new food vendor will roar onto the scene with 27 tons of truck with a grill stretching to almost 100 feet! Juicy’s Outlaw Grill, billed as the “World’s Biggest Barbeque,” can cook more than 1,000 juicy turkey legs, hamburgers and sausages simultaneously. Visit this monstrosity at the Sparkletts Water infield.

Other new attractions will be the First Annual Marble Tournament hosted by the Vietnam Veterans of America, an archery demonstration by former Olympians and a zucchini race. Attach wheels to your decorated zucchini on June 28 and see if you win the blue ribbon. Check out the “Lumberjills,” a demonstration by a group of women lumberjacks.

Like to be spun around until you feel that your insides are on the outside? The new ride StarFlyer is right for you. Riders are lifted 140 feet high and then spun around at speeds reaching approximately 44 miles per hour. It not only spins you forward but backward and up and down!

Another thrilling ride, appropriately named “Speed,” is a pendulum swinging 120 feet high where riders experience four Gs as it swings back.

The 59th Junior Livestock Auction will take place Friday, July 4, at 10 a.m. in the Auction Ring. Among others, members of 4-H, FFA and Grange from the Fallbrook, Bonsall, Rainbow and De Luz areas will auction the animals that they have been raising for several months.

The youth have paid for their own animals and have taken care of them, care which includes feeding, grooming and paying for necessary veterinary services. The auction funds raised by the youth will support their educational goals as well as allow them to purchase animals for future projects. Find out more information by sending an e-mail to [email protected] or calling (858) 792-4283.

This year you will find a Baby Chick Hatchery and a display of the changes in farm life over the past century. The large beef cattle will be housed in the Livestock Barn and Barn W June 24-28 and Ostrich and Camel Racing will take place June 14 and 15 at the Chevrolet Del Mar Arena. Every day there is a Turkey Stampede at 11:30 a.m. in the infield and Swifty Swine Racing Pigs at 11 a.m., 12:30 p.m. and 2:30 p.m.

As always, there is entertainment for everyone at the fair. Grandstand shows such as Fergie (June 27; paid show), “Weird Al” Yankovic (June 30) and KC and the Sunshine Band (July 4) cover a wide range of age and interest groups. Find out about all 22 Grandstand shows this year at http://www.sdfair.com.

There is also an impressive list of performers at the Chevrolet Paddock Concert Series, including Rare Earth (June 18) and Blood, Sweat and Tears (July 2). The San Diego Showcase will feature Micky Dolenz of the Monkees (June 19), Pat Boone (June 26) and Charo (July 3).

Don’t leave the fair without visiting the clever and colorful flower displays at the Paul Ecke, Jr. Flower and Garden Show, or the woodworking, or the gem and minerals or the Kid’s Best. There’s so much to see you’ll probably want to visit more than just one day! 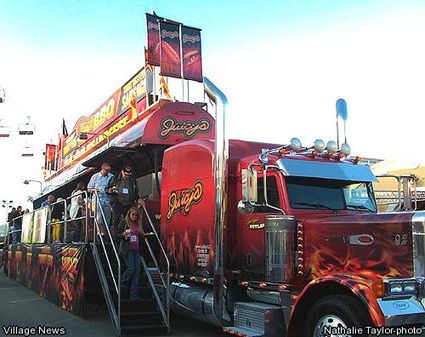 From I-5, take the Via de la Valle exit, head west and turn left at Jimmy Durante Boulevard