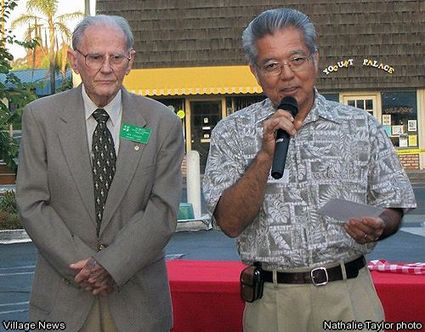 Wil Gower (left), 90, was honored with a Community Service Award at the Fallbrook Chamber of Commerce Sundowner on September 17 at First National Bank of Southern California. Pastor Dennis Ginoza (right) was one of the individuals who gave testimony in honor of Gower.

Wil Gower, a longtime Fallbrook community volunteer who is still active at age 90, was honored with the Community Service Award at the Fallbrook Chamber of Commerce Sundowner on September 17. The event was sponsored by, and held at, First National Bank of Southern California on Main.

Testimonials regarding Gower were given by community leaders and friends, including Pastor Dennis Ginoza of Fallbrook United Methodist Church and Julie Reeder, publisher of the Fallbrook/Bonsall Village News. Casey Antonelli, operations manager of First National Bank and Sundowner committee chair, was emcee for the event.

Bruce Dennett from the Fallbrook Garden Club mentioned that Gower had changed his life because he encouraged him to get involved in the community. “Wil is a leader because he will take a task, organize it and complete it,” Dennett commented.

Pastor Ginoza also had glowing praise for Gower and thanked him for his efforts as publicist, photographer and a member of the finance and stewardship committees. Ginoza called Gower an “ambassador, leader and unselfish caregiver.” “You are a true servant of God,” Ginoza continued. “God bless you, Wil Gower.”

Gower has been a longtime friend of the Village News, according to Reeder. He came to the aid of the company with solid advice during difficult times after the 9-11 tragedy. Over the years, Gower has brightened up the Village News with his many photographs and stories.

Phil Delaney mentioned how Gower has been “active in just about every group in the community” and told the audience how Gower is also a “published author read all over the world.”

Gower, as he humbly accepted the award, said, “It’s been a pleasure. Thank you very much.”

Candidates for Chamber president and board were introduced by Eileen Delaney. The president candidates are Julie Reeder and George Archibald. Chamber board candidates are Casey Antonelli, Roy Costello, Regina Grevatt and Bob Hillery.