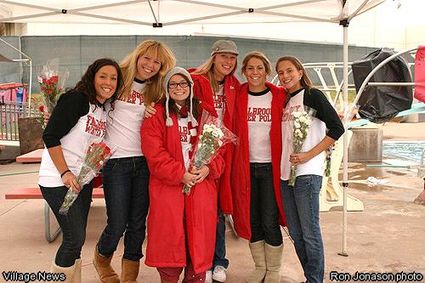 The Warriors had a 9-1 record in Avocado League play, losing only to Torrey Pines in one of the two games between Fallbrook and the Falcons.

Fallbrook ended the regular season with a 17-9 record.

“They really came together and finished strong,” Fallbrook coach Bob Lamont said of his team.

The 2008-09 team began the season 4-5, although three of those losses were to teams outside of the CIF San Diego Section.

Fallbrook then put together a six-game winning streak, including a win over Torrey Pines January 22 in the first round of league play.

Torrey Pines dominated the rematch February 10 at the UCSD pool, winning by a 9-2 score.

“They played a very good game and we played not as well,” Lamont said.

In the January 22 contest at Fallbrook, the Warriors scored on two of four extra-player situations while the Falcons converted only one of eight advantages.

Fallbrook converted one of eight extra-player opportunities in the February 10 game.

“It kind of turned around to their favor,” Lamont said. “That was a notable difference.”

“The quality of their goalkeeper was much improved,” Lamont said of the teams’ second competition against each other. “We helped her out with poor shot selection and location.”

Torrey Pines led 4-1 at halftime and 5-2 after three periods before scoring four times in the fourth quarter. “They kind of pulled away there at the end,” Lamont said.

The Warriors recovered from the loss to defeat La Costa Canyon the following day at the Ecke YMCA.

“They came back and bounced back nicely, which shows you some of their resilient quality,” Lamont said.

“That was a real nice performance down there to get us going,” Lamont said.

The festivities were followed by an 11-4 victory over the Wolverines. “Everybody played well,” Lamont said.

Six different players scored for the Warriors while Tobey and Hunter Bowman dominated the defense. 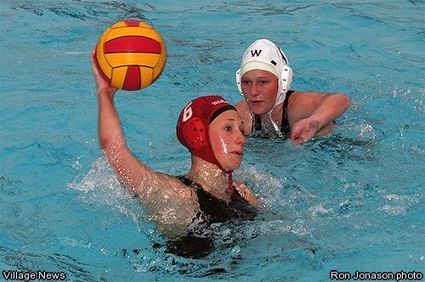 Lady Warrior Kathryn Majdick makes a nice pass to a teammate during the game against Westview.

“Made it very difficult for their set,” Lamont said of Fallbrook’s defenders. “That forced them to perimeter shooting.”

The Warriors led 4-2 at the end of the first quarter, and neither team scored in the second period. “We kind of pulled away in the back half,” Lamont said.

“As a coach you like to see a strong finish in a game,” Lamont said. “Your conditioning was doing something right.”