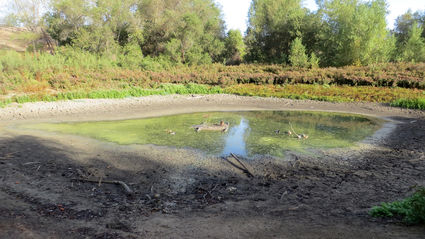 For all the water saving tactics San Diego County residents have employed, they’re not helping nature take care of her own. This photograph, taken the morning of Oct. 7, shows all too acutely what drought means to Fallbrook. This is what’s left of the man-made pond in Los Jilgueros Preserve.

Acquired by the Fallbrook Land Conservancy in 1990, plentiful rains once filled the preserve pond so that water flowed from it across a concrete dip in the major trail through the interior, making the trail nearly impassable. As the Southern California drought wore on, even though sporadic rain fell on the 43.5-acre preserve, replenishing just enough moisture to revive natural plants, the pond never reached its previous capacity.

At one time ducks wintering over in Fallbrook hid from coyotes under the low hanging willows surrounding the pond. The pink-hued layer of foliage in the background of the photo shows the first boundary of the pond when it was full of frogs, turtles and fish. Over the summer, as the pond level sunk lower and lower, mosquito fish rose to the surface to eat larva. Now even they are gone.

All that is left of the pond is a murky toxic brew choked with algae. The ducks in this photo will relocate because they no longer can find food or safety for building nests and raising their young as they have here for the last two decades.

Within walking distance is the glorious pond fed by a well at the Grand Tradition. Perhaps the ducks will fly there for the winter, build nests and raise their ducklings. For now, unless rains come to Fallbrook, the pond at Los Jilgueros, once brimming with life, is no more.