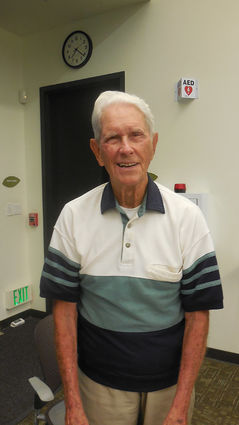 The May 4 Woman of Wellness program was all about honoring and celebrating "Older Americans Month." In talking about this year's theme, “Age Out Loud," Fallbrook Regional Health District board member Barbara Mroz said, "what it means to age has certainly changed" as seniors today "have not only survived but thrived."

Bledsoe, almost 95 years old, has been walking for exercise since he was 67 and teaches others the right way to do it. He reminded everyone to walk into the wind and to never walk with traffic. He advised "use your arms to get the most out of exercising," pumping them but not so high as to punch the sky he said.

Bledsoe explained that race walking is good for the cardiovascular system. He also described the different ways of walking (strolling, walking and talking, the aerobic walk, and brisk walking). He ran on the track team at Grossmont High School.

"I'm a competitor; I love to compete," he said. Walking is also less stressful on one's body."

Taylor, 89 years old, was born in Alabama and started picking cotton when she was 7 years old. She and her husband moved to Fallbrook in 1951, the same day movie director Frank Capra arrived here. Her husband got a job working for Capra on his property.

Taylor said she raised nine children who are "all up in years by the grace of God." Taylor also said that in the bad times, "I told God if he helped me, I would help my fellow man."

She served as the chaplain at Fallbrook Hospital and is now the chaplain at the Fallbrook Skilled Nursing Facility and Silvergate. Mroz said that Taylor is continuing on a tradition she started years ago – baking bundt cakes early in the morning to give away to people to brighten their day.

"My philosophy of life and how to stay young up here (pointing to her head) as long as possible is: don't ever lose your enthusiasm for what you're doing, and keep busy every day and be around children," Heyneman said.

Heyneman visited a relative in Fallbrook in 1969. Because she had to move 17 times during her husband's 27 years in the Navy, he let her pick the place where they would retire. She chose Fallbrook, especially loving Live Oak Park Road and its oak trees.

Less than a year later, the county marked over 20 of those trees for removal. Heyneman formed a group, "Save the Oaks," and lobbied the county for weeks. They finally hired a lawyer, Roger Hedgecock, to convince the county that it was not necessary to remove all the trees. Ultimately, only two were removed.

Ten years later, the battle was renewed when the county decided to cut down trees at Live Oak Park which resulted in "Save Our Forest" being formed as a committee of the Fallbrook Land Conservancy. Only one and a half trees were lost that time.

Heyneman is very involved in the group's Environmental Education program.

"I feel the important thing for all of us, the older you get, you need a purpose in life – for me it's planting trees," she said. "Give your time to something and help others."

The fourth and youngest presenter was Roger Elyea, who is 78.

"Humor is a really important part of life, to keep young, keep a sparkle in your eye, be able to laugh," he advised. "Have a great relationship with your mate, do things together, go to church together, participate in projects with youth."

Elyea has 12 grandchildren so he also included working with young teenagers, to mentor them, as a way to stay young.

"Just being around kids and youth helps keep us young," as well as exercising, watching one's diet and getting involved in the community, he added. 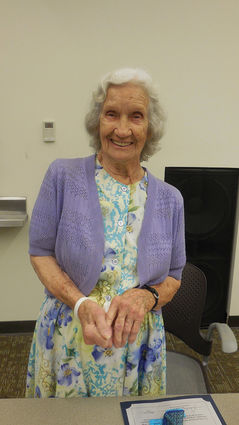 Each of the four presenters was given a certificate of recognition from Supervisor Bill Horn in honor of their contributions to their community. Horn also sent a framed proclamation honoring Older Americans Month. It explained that the theme of "Age Out Loud" is "designed to give aging a new voice, one that reflects what today's older adults have to say..." and commended the Fallbrook Regional Health District (FRHD) "for its outstanding service, leadership and commitment to the health and wellness of San Diego residents."

Woman of Wellness is sponsored by the FRHD and provides free monthly programs offered on a broad range of topics including staying well, getting well, being well, and living well. The program is held the first Thursday of each month in the community room of the Fallbrook Library.