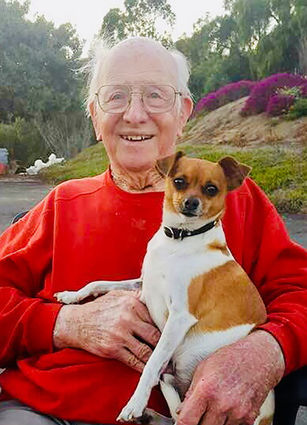 He retired from the Navy with 31 years of service as a chief warrant officer. He was one of the few Pearl Harbor defenders who were celebrated Dec. 7, 2018, at the Oceanside Memorial. He had also been the grand marshal at the Fallbrook Memorial Day Parade. He regularly attended the Fallbrook Veterans of Foreign Wars and played pool. Many knew him and his dog companion Sandy and later Lil Ricky. He cherished his friendships acquired at the VFW.

John retired from Los Angeles Harbor College in 1983. He began his career there as a temporary machine shop instructor. He retired as associate dean of vocational education.

He was also a 69 year member of the Elks lodge.

After retirement in 1983, he and Virginia Quier moved to Fallbrook. They were married for 67 years before her death in 2010.

John will be missed by all who knew him. He is survived by his daughter, Carol Ann Plechner; four grandchildren, Richard, Jennifer, John and Andrea, and nine great-grandchildren.

Memorial services will be held at Berry-Bell and Hall Fallbrook Mortuary, Saturday, Feb. 23, at 11 a.m. He will be buried at Riverside National Cemetery.

Please join the family Saturday to celebrate his life.