'The Underpants' has its ups and downs 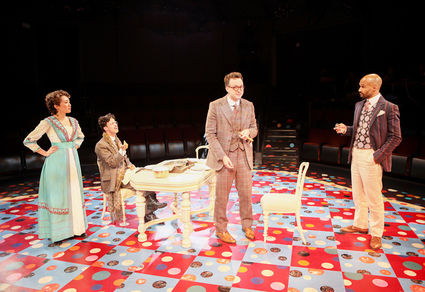 Seen in as scene from "The Underpants" by Steve Martin are, from left, Regina De Vera as Louise Maske, Michael Bradley Cohen as Benjamin Cohen, Eddie Kaye Thomas as Theo Maske and Luis Vega as Frank Versati. Directed by Walter Bobbie and adapted from Carl Sternheim, the play runs through Sept. 8 at The Old Globe.

Name recognition is the draw for this current production at The Old Globe's Sheryl and Harvey White Theatre in Balboa Park.

Steve Martin debuted on The Smothers Brothers TV show which ran 1967-1969. His quirky physical humor coupled with a perverse manifestation of everyday occurrences, reeked of irreverence and an unmitigated disrespect for societal mores became his comedic niche. Some might say genius.

Case in point, in Martin's first film "The Jerk" he plays an innocuous-white guy adopted by a black family. Navin R. Johnson's one talent is cat juggling. Navin is a simple fellow so when his name appears in the local phonebook, he becomes euphoric. If his name is in print, he must be famous!

Enhanced by Martin's turn of phrase – nothing is sacred in "The Underpants." No moral high ground is too low. The thin plot is based on one of the character's 15-minutes of fame.

Martin adapted "The Underpants" from an original work by William Adolph "Carl" Sternheim (1878-1942) about 17 years ago exposing his self-importance with several personal references in the rewrite.

Sternheim was forced to rename his play to pass Germany's hypocritical morality code. Retitled "The Giant," he still set about spurning Germany's emerging middle-class in this satirical commentary.

Louise Maske (Regina De Vera) stepped up for a better view of the royal parade. When her bloomers accidentally drop to her ankles, she prays everyone's eyes are averted to the king's passing and not on her incident. Quickly, Louise snaps up the miscreant lingerie, wraps it in her shawl, and scampers home.

As it happens, the incident was not overlooked. It was viewed by several ogling males. One such fellow, poet Frank Versati (Luis Vega), actually follows her home.

Therefore, when poet Versati sees the "For Rent" sign posted over the door, he decides to pursue Louise by becoming her tenant.

Not knowing she was followed home by Vega, Louise rents to the charming poet.

(Is it not shocking by today's standards to be stalked to one's residence? Although, apparently in 1910 Germany, it was funny).

In true farcical form Theo meets the second lecher, barber Benjamin Cohen (Michael Bradley Cohen) at his front door reading the "For Rent" sign. Not knowing his wife already rented the room, or that Cohen was pursuing Louise, Theo rents the room to the barber.

Adding to the mayhem is the saucy upstairs neighbor, Gertrude (Joanna Glushak). Eavesdropping through the floor boards Gertrude encourages Louise to follow through and have a tryst with the handsome Vega.

Needing privacy for her assignation while Theo is at work, Louise sneaks a sleeping potion in the barber's drink. He is affected instantly. His legs go numb. He can't walk. In the dazzling styling of commedia dell'arte, Michael Bradley Cohen pays tribute to Steve Martin. Cohen's insane acrobatic ability earns him well deserved exuberant accolades.

Alas, when both boarders are spurned, they depart. By chance, a stylish gent named Klinglehoff (Jeff Blumenkrantz) appears. Most civilly, Klinglehoff questions the Maskes, "Is the building a quiet place to reside? Are there any children in the building? Any tubas? Any sewing machines? Any parrots? Any banjos?"

As it happens, all calamity falls to director Walter Bobbie. First, one has to wonder why the audio was nonexistent? The actors were forced to shout their lines. Nevin Steinberg needs to fix the sound. The shouting is annoying! Second, Miss de Vera and Mr. Zarif (in a walk on as the King) are exposed for their inexperience.

John Lee Beatty's set shows his imagination. Although, it is a giant stretch to conjure a shabby chic white table with matching chairs and a bar cart in a middle-class apartment in 1910 Dusseldorf. On the other hand, the bit with the doors works. The mechanical cats and caged bird did at first but in true Steve Martin style, the charm wears thin degrading into annoyance as the meowing and chirping spiral the drain sinking to stale.

It seems redundant to mention that theatre is largely visual. But that said, the lighting was masterfully done by Philip S. Rosenberg. Lighting design is hard. Yet, when it is done this well it is easy to overlook.

It is the lighting that enhances costumer Alejo Vietti's creations. Every actor is handsomely dressed in what appears to be custom-fit attire made with haute-couturier workmanship. His attention to detail is of the highest standard.

Keeping true to his humor, Martin's adaptation boasts offensive equality. He taunts morality by mocking the Jews and Catholicism. He uses over-done-farcical sexual innuendo. His chauvinistic stereotypes even resort to cat tossing (not juggling). He sacrifices all dignity by emphasizing even a momentous event with farts.

With a keen sense of understanding of the worst of human behavior, Martin spurns bourgeois' morality, giving no quarter.

Matinees provide easy parking by turning left off the Park Street exit. Turn left over the causeway. Stay right. The big lot is on the right-at-the-first light for the free tram to the park center. Naturally leave valuables at home or in a locked trunk. Paid parking is another option. Check with the box office.

It is fun to arrive early to grab a small bite at the Bistro Bar and Restaurant before the show. It is across the street from the tram drop-off and a short stroll to The Old Globe complex. Overall, a great day in Balboa Park.

While playwright Sternheim is "often dubbed 'the German Moliere'" – Steve Martin's rewrite rates a weak 8 out of 10.