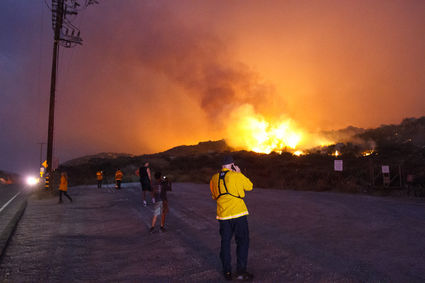 The Tenaja Fire has charred 1,400 acres and a of the 6:20 a.m. update is 7% contained, Cal Fire/Riverside County Fire Department officals said.

All mandatory evacuation orders remain in place and firefighters remain on scene in strength as they work to fully contain and control the fire.

The South Coast Air Quality Management District has issued an air quality advisory for the area surrounding the fire.

"Light winds from the north are expected to continue through Thursday morning, which may transport smoke into the Temecula and Capistrano Valleys and into San Diego County. Strong winds from the southwest are expected on Thursday around noon. If the Tenaja Fire continues to generate smoke on Thursday afternoon, smoke may again impact the Inland Empire," the SCAQMD press release said.

As the Tenaja Fire continues to burn in LaCresta with only 5% containment, Riverside County Health Officials are urging residents in parts of southwest Riverside County to limit outdoor activities due to the smoke and ash from the blaze.

"Many residents in southwest Riverside County neighborhoods may find driveways and homes covered in white ash that may fall onto cars, settled into pools and onto sidewalks," a press release issued by Riverside County Public Health's Public Information Officer Jose Arballo Jr., said.

"Ash and smoke can be hard on anyone to breathe, but especially those with lung disease," said Dr. Cameron Kaiser, Riverside County public health officer. "Everyone worries about the flames, but smoke can impact you even if you're miles away from the fire."

The smoke and ash advisory was issued by Kaiser for portions of Southwest Riverside County, including Murrieta, Temecula and Lake Elsinore areas.

Precautions that should be taken include avoiding any vigorous outdoor or indoor exertion. Those with respiratory or heart disease, older adults, and children should remain indoors.

Other precautions include keeping windows and doors closed along with running air conditioners with the fresh air intake closed and the filter clean to prevent bringing additional smoke inside.

In other fire news, mandatory evacuations remain in place for residents in Copper Canyon South of Calle del Oso Oro between Clinton Keith and Murrieta Creek at Calle del Oso Oro, all residences along The Trails Circle, in La Cresta and the Santa Rosa Plateau Visitor Center located at 39400 Clinton Keith Road.

A care and reception center has been set up at Murrieta Mesa High School, 24801 Monroe Avenue. Small animals are being accepted at the care and reception center, located at Murrieta Mesa HS. Large Animals can be taken to the San Jacinto Animal Shelter 581 S. Grand Ave. San Jacinto, CA 92582. Horse trailers can be taken to the Los Alamos Sports Park.

Murrieta Valley Unified School District has cancelled all classes for Thursday, Sept. 5 due to the fire.

Murrieta Valley Unified School District announced that all schools would be closed on Thursday, Sept. 5 due to the fire.

"This measure was taken in consideration for the safety and well-being of our students, staff and their families," the district wrote in a post on its Facebook page. "In addition, with the number of mandatory and voluntary evacuations in place and road closures in the area of the fire, we anticipate students, staff and teachers would have difficulty getting to school sites tomorrow.

"It is difficult for first responder professionals to predict fire and air quality for tomorrow. Nevertheless, our top priority is the health and safety of our school community and the need to make this determination in a timely manner."

Temecula Valley Unified School District schools will be open, according to a post on the district's Facebook page late Wednesday night.

"We will evaluate the air quality conditions in the morning to determine outdoor activities and potential limits as a result of the surrounding area fire," the post read.

Evacuation warnings have been issued for the Bear Creek and Copper Canyon communities.

There were no reports of structures being threatened or having been destroyed.

The La Cresta fire was reported by Cal Fire Riverside County to have spread to 150 acres with no containment as of 6:30 p.m. In addition to a road closure on Clinton Keith Road south of Avenida La Cresta, Tenaja Road was closed in both directions, and the Santa Rosa Plateau Visitor Center is under evacuation orders since 5 p.m.

At 6 p.m. mandatory evacuation orders have been issued for all residences along The Trails Circle in La Cresta.

According to Cal Fire, more than 270 fire personnel, six air tankers, and three helicopters were fighting the fire.

MURRIETA - A brush fire that was possibly triggered by lightning erupted on Wednesday, Sept. 4 in La Cresta, just west of Murrieta, blackening 25 acres in 30 minutes.

The non-injury blaze was reported about 3:55 p.m. in the area of Clinton Keith and Tenaja roads, in the unincorporated community of La Cresta, according to the Riverside County Fire Department.

The agency sent 19 engine crews and four hand crews, numbering more than 100 personnel, to the location. They encountered flames in heavy vegetation, spreading quickly to the northeast, and erratic winds.

No homes were immediately threatened by the brusher, on which four Cal Fire air tankers and a water-dropping helicopter were making runs.

A thunderstorm cell moved through the area just prior to the fire, and it's suspected a lightning strike ignited it.

Power lines were also reported down at the location.

Kim Harris and Jeff Pack contributed to this report.

This is a breaking news story that will be updated when information becomes available. 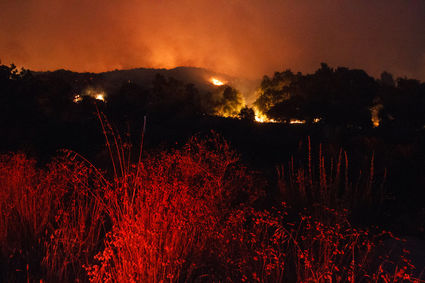 Vegetation burns near the Santa Rosa Plateau Visitor Center during the Tenaja Fire on Wednesday, Sept. 4.