The Nicavangelists to perform at Temecula Masonic Center 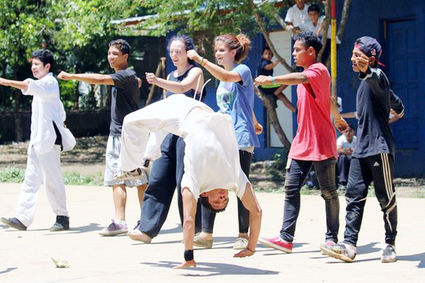 Street children from Nicaragua, as a part of the talent development group "The Nicavangelists," are coming to Southern California and will be performing in Temecula Sunday, Sept. 8.

The Nicavangelists are at-risk youths from the streets of Managua, Nicaragua, and through a talent-development program, they receive food, housing, clothing, an education and the chance to develop skills in performance arts.

The Nicavangelists will perform at 3 p.m. at the Temecula Masonic Center, 27895 Diaz Road, across the street from the DMV. There is no charge for admission, but a free-will offering will be taken to support The Nicavangelists.

The Nicavangelists seek to share their hope, talents and culture with the world. Their street theater productions focus on current cultural conditions in the context of a biblical story. The core components of the production are Miskito folkdance; tricking, which is an art form evolved from African slaves which incorporates elements of martial arts and gymnastics; break dance; Latino ballroom-styled dance genres; modern dance; drama and song. The production is completely choreographed by The Nicavangelists' troupe members, with assistance from the director of Nicaragua's premier Academy of Dance. The dance troupe performs with high energy and precision. Visit http://www.nicavangelists.com to see them in action.

To highlight the socio-political crisis in Nicaragua, The Nicavangelists perform all over the U.S., Europe and Central America. They will also share their views and personal experiences of the current situation in Nicaragua, the government repression, genocide, etc. Last year their people were attacked in Nicaragua with gunfire, confronted by paramilitaries and followed home by masked men carrying large weapons.

The director, mentor and teacher of The Nicavangelists, Jed Brian's described them as "Kids, teenagers, youth... living in poverty, forced into prostitution, fighting for survival in gangs... the fatherless, the orphaned, the rejected and abused... each one is special and possesses potential for greatness."

For more information, contact United Church of the Valley at (951) 698-1520 or email Lynne Bradley at [email protected]

Submitted by United Church of the Valley.