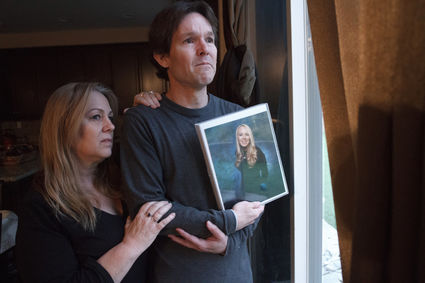 When he took to the podium at the Temecula City Council meeting on Tuesday, Feb. 4, Alex's dad looked shaken, but he took a deep breath, adjusted his glasses and began to read from a speech he had written.

"I just found that three more young people in Temecula have died since then."

As he continued to fight back tears and rage in his voice, Alex's dad told the city council of warnings issued about the danger of fentanyl and of weak laws pertaining to drug dealers.

"I'm asking you to help me fight this epidemic," he said.

"The Riverside County Sheriff's Department and the Drug Enforcement Administration (DEA) is alerting the public of dangerous counterfeit pills killing people in our communities," the bulletin reads. "Mexican drug cartels are manufacturing mass quantities of counterfeit prescription pills containing fentanyl, a dangerous synthetic opioid that is lethal in minute doses, for distribution throughout North America."

The bulletin goes on to say that the department has responded to an "alarming number" of overdose incidents involving counterfeit "Percocet" and "Oxycodone" pills.

"A number of overdoses resulted in the unfortunate death of the individual," the bulletin reads.

At the bottom of the bulletin, in red lettering and all caps, it reads: "Multiple overdoses have already occurred in the Temecula Valley."

According to the United States Drug Enforcement Agency, "Fentanyl is a synthetic opioid that is 80-100 times stronger than morphine...Fentanyl is added to heroin to increase its potency, or be disguised as highly potent heroin. Many users believe that they are purchasing heroin and actually don't know that they are purchasing fentanyl – which often results in overdose deaths." According to the Center for Disease Control, "overdose deaths involving synthetic opioids other than methadone, which includes fentanyl, increased almost 47% from 2016 to 2017. Roughly 28,400 people died from overdoses involving synthetic opioids other than methadone in 2017."

According to 2019 data provided by the San Diego County Medical Examiner's office and a report from the county, "unintentional fentanyl overdose deaths in the San Diego region increased by 68% when comparing this year's midyear data with the same period for 2018... from January through June this year, there were 69 fentanyl deaths compared to 41 in the first six months of last year."

"In the last decade when someone overdosed on fentanyl, it was often when someone was prescribed it, and perhaps put on too many fentanyl patches or altered the patches," said Chief Deputy Medical Examiner Dr. Steven Campman. "I can't even remember the last time I saw a death from misused prescribed fentanyl.

In talking with law enforcement officials and people working on the front lines of opioid addiction and drug-related cases - the rise of fentanyl is an outright epidemic and it's growing every day.

Alexandra Capelouto, according to her dad, overdosed and died after taking a lethal dose of a drug he said was laced with Fentanyl in her own bedroom while visiting home during the winter break from Arizona State University where she was a straight-A student.

"This happened in the comfort of her own bedroom late at night by herself," Alex's dad said. "Of the four kids that died in December, three of the kids died by themselves in their bedroom. This isn't like they're out taking this partying, have another woohoo good time. These are kids who are addicted. You get to the point with addiction where you need this to feel normal or you want the pain to go away so bad. "The addict's craving overrides the ability to make a rational decision and they end up taking this stuff that is just bought off the street or wherever."

He said he's learned a lot about addiction and the effects the disease can have on even the strongest, most intelligent individuals in society.

He said he watched a video that explained to him how gripping addiction can be.

"After watching this video, I understand," he said. "Because there are genetic differences in the brains of people who are susceptible to addiction and just like any disease, it needs to be treated. Not all addicts are liars, stealers and cheats."

He said he's learned drug users who suffer an overdose are likely to suffer another one.

"If somebody does this for the first time or they've relapsed, your journey is not over with, your journey is just beginning," he said. "And then this is something that you just have to manage for the rest of your life and get it under control. Unfortunately, my daughter won't have that second chance."

He said he will be speaking publicly more in the future to reach out and educate parents and the community.

"I do plan on speaking about this," Alex's dad said. "In fact, I know what I've learned over the last month and a half. I absolutely 100% know based on my personal experience with this at this point, I know that there's information that can be given to parents at this point that can absolutely save kids' lives.

"I know what information was not provided to us that, had we had had it, my daughter would be alive today."

For now, he is narrowing his focus to helping to change laws and standards of charges that can be brought against dealers who sell drugs to people who die as a result. It was partly the reason he wanted to speak at the city council meeting.

"The maximum extent of the law is potentially manslaughter," Alex's dad said. "To me it's murder. But unfortunately, California sucks. In most cases and I'm talking just about every single case, the most the drug dealer gets charged with is selling and dealing drugs and they spend very, very little time, if any, behind bars."

Alex's dad said since the video has reached more than 15,000 views, he's received a lot of correspondence from family members who have lost loved ones to the drug.

"Since this video has gotten out there, when I get home from work at night, I'm getting on my computer and stuff and I'm trying to reply to people as best as I can," he said. "I have had so many people reach out to me. 'Oh, my brother died of fentanyl last year.' 'Oh, my kid died of fentanyl poisoning back in 2015.' 'Oh, my best friend died of Fentanyl.'

"I'm wondering, is there any office where we can find out how many people have actually died from it? I am guessing that the numbers would be alarming. You heard about four here in December. A detective told me that actually over the last month and a half, including December with my daughter, that things slowed down quite a bit to where they're averaging like one a week where he said for a period of a few months they were averaging one to two a day."

Editor's note: This is the first in a series of stories pertaining to fentanyl and the fatal risks associated with the drug and its effects on the community. The Village News will be speaking to people on the front lines of this epidemic.