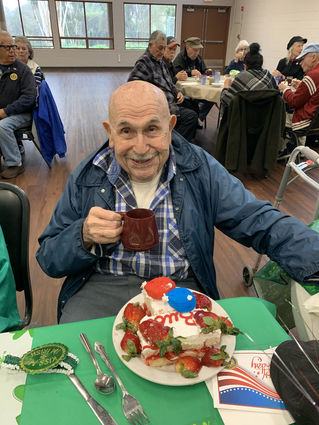 Roberds often plays the piano for the congregate meals held at the Fallbrook Community Center. This time, some of the Fallbrook Ukulele Strummers provided musical entertainment.

Roberds is a familiar figure at Peking Wok in River Village where he plays the piano Tuesday and Thursday nights, at St. Peter the Apostle Church where he attends Sunday morning Mass and at California Retired Teachers Association meetings.

His biography is also familiar for a man his age. Roberds grew up in San Jacinto, California and married Jewell Tripp, January 1941. They had been married for 73 years when she died in 2014.

They lived in Burbank while he continued his education at UCLA. In the middle of his senior year, he was drafted into the U.S. Army,

March 1943. He went through basic training at Fort Custer (Michigan) in the Military Escort Guard unit, and his first assignment was guarding German prisoners of war at Fort McClellan (Alabama).

Roberds was transferred to a 40 mm anti-aircraft artillery unit in 1944, eventually joining General George Patton's Third Army when it crossed the Rhine River in March 1945.

His unit was guarding an airport north of Munich when the German war ended. He stayed in Munich another year as part of the occupation force before returning to the U.S. in March 1946. He was discharged April 5, 1946.

After returning stateside. he was offered a position to teach music at his alma mater, San Jacinto High School. Having passed his midyear exams before being drafted, he did not have to go back to college to finish his degree.

Roberds, who as the son of a musician grew up learning to play various instruments, taught music in San Jacinto for nine years before he and his wife moved to Fallbrook in 1956.

Roberts was employed as a music teacher by both the Fallbrook Elementary and Fallbrook High school districts for four years before he became full-time at the high school in 1960. 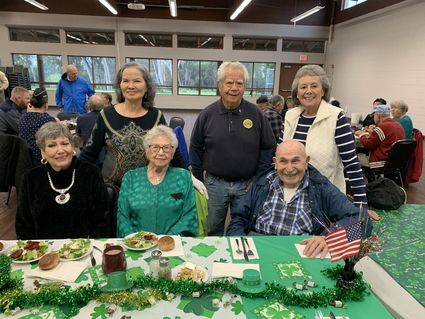 Attending the birthday lunch are, from left, seated, Jane Lewelling, Lucy Sanders (who turns 99 in April), Bud Roberds; standing, Hanh DeMore, Michael Bermudez and Rosa Bermudez. Sanders to celebrate 99th birthday Lucy Sanders has lived in Fallbrook since 1959. She was born April 9, 1921, and remembers her sixth birthday party when her mother went into labor and had her younger sister that same day. Sanders and her sister plan to go to Las Vegas for their birthday this year. Like Bud Roberds, Sanders also just renewed her driver's license.

Roberds counts his two children – Bill (class of 1969) and Lorraine (class of 1972) – among the students he taught at Fallbrook High before retiring from the school in 1979.

In May 2018, Roberds was chosen to go on an Honor Flight to Washington, D.C. His son was his guardian for the trip. The group was taken to all of the war memorials, but the most memorable part of his Honor Flight trip was "that return to San Diego."

"As we were coming into land (at San Diego International Airport) the pilot told us to look out the window," said Roberds. "Then we saw all these police cars lined up with their lights on to welcome us home."

Once in the terminal, the group was greeted by a throng of cheering people. "God almighty," said Roberds, the memory causing his eyes to tear up like they did that day. "A lady gave me a tissue. When I was talking to other guys, they said they had tears. It was one of the most amazing group things I've been involved with. This really touched me. It was the end (of the trip), but the climax."

Roberds still lives at home and, while he has a caregiver, he continues to drive himself wherever he needs to go. He just renewed his driver's license, for five years.