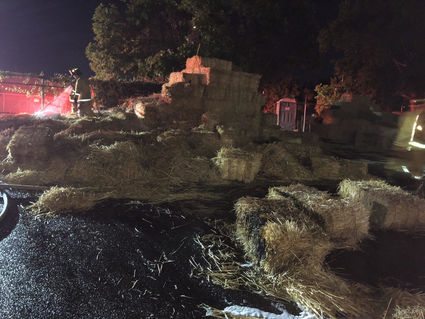 A hay fire on Old Stage Road was among the five separate small fires reported in Fallbrook on July 4. It remains unconfirmed whether any of them were caused by fireworks. Village News/North County Fire courtesy photo

At least five separate small fires were reported in the Fallbrook area on the July 4 holiday.

None of the fires impacted structures. While North County Fire Protection District Capt. John Choi could not confirm whether any of the fires were caused by fireworks, he did say that possibility was under investigation for at least two of the blazes, both of which were reported after dark.

The first fire to be reported on Saturday was a small vegetation fire located just east of Interstate 15 in Rainbow. According to North County Fire on Twitter, the fire district forward spread of that blaze was...