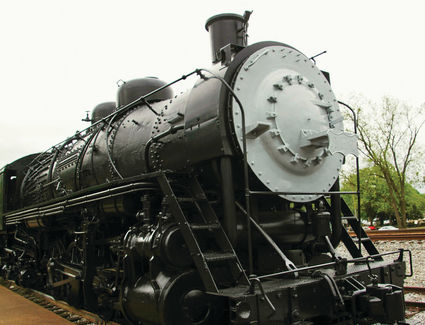 A 1912 Frisco Railroad steam engine is an integral part of the Collierville open-air railroad museum, described in "Captivated by Collierville, Tennessee," published Dec. 19, 2019, in the Village News.

Since 2004, Taylor has won 87 writing awards. She has also taken many of the photographs that accompany her articles.

Taylor received four first-place awards, two second-place awards and one third-place award. Five of the articles were published in the Village News, and two were 2020 Sourcebook articles.

Taylor was honored with first place in the Travel/Domestic category for "Captivated by Collierville, Tennessee," published Dec. 19, 2019, in the Village News. Excerpts: "A map? Who needs a map? The narrow road narrowed even more – and then – as we rounded a tight curve – the headlights illuminated a massive sign: 'Welcome to Mississippi' Mississippi? What happened to Tennessee?"

The writer took first in Travel/International with, "A royal time in Windsor," published in the Village News, Aug. 24, 2019. An excerpt describing the 75th Royal Windsor Horse Show: "From our front-row seats, we could hear the rhythmic cadence of hoof beats and the gasp of the audience when a horse cleared a particularly high 'jump.' Queen Elizabeth II, dressed in an elegant pink suit with matching hat, presented the trophies..."

Taylor took both first and second place in the Review/Live Performance category. Her first-place story, "Air Supply rocks the Fair," was published in the Village News July 19, 2019. An excerpt: "The concert wasn't just a journey to the past, but it was an appreciation for the duo's longevity, the sustaining charm of their voices and the endurance of their songs."

"Dionne Warwick wows at the San Diego County Fair," published in the Village News July 30, 2019, was the writer's second-place award in Review/Live Performance. Excerpts: "Warwick's range is still impressive – strong and deep, with occasional emotional whispers. For the finale, Warwick sang, 'That's What Friends Are For.' It was magical. What a show. Such an inspiring legacy of love."

Taylor took second place in Magazines/Entertainment for "An Evening with Robert Conrad," published in the 2020 Sourcebook magazine. An excerpt: "My mother's last comment was, 'I love you and am praying for you.' Conrad responded with a glint in his blue eyes, 'I love you too and look forward to seeing you next time.' There was no 'next time.' Conrad died of heart failure Feb. 8, 2020. Those blue eyes only sparkle on film now."

The writer's third place award was in the Entertainment category for, "Ashley Colburn: 'Finding Wonder in the World,'" published Aug. 16, 2019, in the Village News. Colburn is a graduate of Fallbrook High School. Excerpts: "Ashley Colburn is a remarkable woman who is leading a remarkable life...Poised and confident, she appears to feel at ease equally on the stage and in front of the cameras. Not forgetting her roots, this kind and considerate woman moves ahead in a flash of energy. Bravo Ashley!"

Taylor, who holds a bachelor's degree in English from California Polytechnic State University, San Luis Obispo, was seated on the Alumni Advisory Board for the university's College of Liberal Arts from 2011 to 2018. Since 2015, she has been a San Diego Press Club Honorary Committee member.