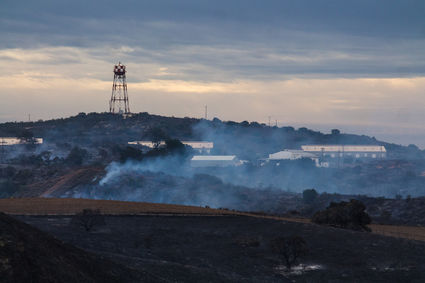 A large brush fire that broke out in De Luz late Wednesday night spread into Camp Pendleton and triggered mandatory evacuations in Fallbrook early Thursday morning. The fire's size had been expanded to 3,050 acres with 0% containment on Thursday morning, but authorities said firefighters had encircled the blaze and expected to control it.

Homes along much of the northwestern corner of Fallbrook were under evacuation orders on Wednesday night and Thursday morning, as the blaze extended into Camp Pendleton and threatened to affect populated areas should the winds shift, according to Choi.

Housing on Camp Pendleton was also under evacuation orders - base officials said on Twitter that DeLuz Housing, Wounded Warrior Battalion, and Lake O'Neill Campground areas were all under mandatory evacuation. Affected personnel were told to relocate to Paige Fieldhouse.

By 7 p.m. Thursday, all homes ordered to evacuate or put on warning were invited to repopulate.

As of Thursday evening, no homes in Fallbrook had been damaged. Earlier in the day, Choi said the damage assessment teams haven't been out to survey any possible damage and that the focus was on suppressing the fire until they are able to do so.

"The winds are favorable to us in the sense that (the fire) is not pushing into us, although it's not favorable to Camp Pendleton," North County Fire Capt. John Choi said Wednesday night.

Overnight Wednesday, the fire was burning along the eastern side of Camp Pendleton, Choi said, and changing winds could cause the fire to immediately impact Fallbrook.

The firefighters caught up in the early morning hours of Thursday.

"We had a lull this morning," Choi said. "We went from a critical rate of spread where we were dealing with 20-30 mile per hour winds - critical rate is the fastest you can have - but in that lull, the fire changed to a moderate rate of spread. That is good, but winds are scheduled to pick up again today."

Choi said a wind shift could have put homes in danger.

"The fire is butting right up against Camp Pendleton and Fallbrook, if those winds should shift any time in the next 24 hours we could have a problem," Choi said, explaining that there isn't enough of a buffer between where the fire is and residential neighborhoods in Fallbrook. "Right now it's good for our community but bad for Pendleton."

However, on Thursday evening, authorities announced that firefighters had built a ring around the fire and that all residential areas were no longer in danger.

The Fallbrook Gate at the entrance to Camp Pendleton and the Naval Weapons Station is closed and traffic is being diverted. A road closure was in effect on De Luz Road at Sandia Creek, Cal Fire said. There was no word on whether those roads had been opened.

The San Diego County Air Pollution Control District issued a smoke advisory for residents near Fallbrook and Camp Pendleton late Thursday afternoon. The agency warned that smoke will likely impact the area throughout the day and residents should assume the air quality levels are unhealthy for all people.

Residents were advised to remain indoors, if possible, and limit physical activities in areas that smell like smoke.

The fire first broke out around 11:30 p.m. Wednesday, when the North County Fire Protection District tweeted that crews were at the scene of a vegetation fire near De Luz Road west of Sandia Creek Drive. 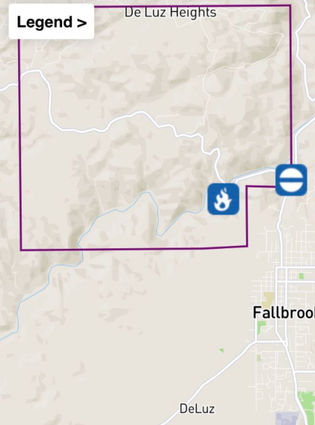 The updated map showing homes that are clear to be repopulated as of 7 p.m. Thursday, Dec. 24. Village News/courtesy photo

North County Fire initially estimated the blaze to be as large as 300 acres, but Cal Fire San Diego tweeted at about 11:50 p.m. that its units were also responding to the fire and were estimating its size at 50 acres. By about 2:30 a.m., North County Fire tweeted the fire had indeed expanded to 300 acres. As of 4:20 a.m., Cal Fire San Diego said the blaze was at 500 acres and 0% contained.

At 7 a.m. Thursday morning, Camp Pendleton updated that the fire had expanded to 3,050 acres with 0% containment with evacuations remaining in place and a significant amount of air assets inbound to continue to battle the blaze.

Choi said the blaze was being handled by firefighters from North County, Camp Pendleton, and Cal Fire.

Jeff Pack and City News Service contributed to this report.