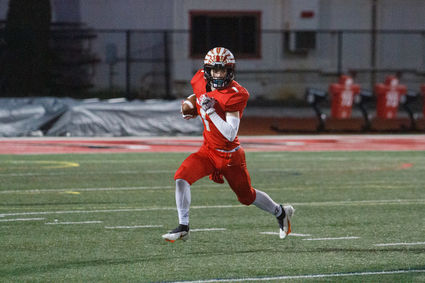 Warrior Noah MacMillan runs with the ball against the Escondido Cougars, April 2.

The Warriors never trailed in the 21-15 game at Fallbrook and at one point had a two-touchdown lead.

"It was a great win for the kids. They just played hard, played smart, played together," said Fallbrook Head Coach Troy Everhart.

The win was the first for Everhart as Fallbrook's football coach. Everhart, who took over the program in 2019, endured 12 losses before the team development allowed for his first Warriors victory.