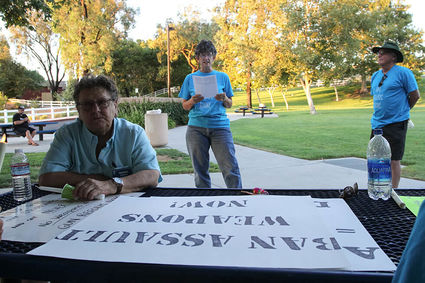 FILE PHOTO: United Church of the Valley member Sherian Spencer expresses views against the sale and possession of assault weapons and to pay respect to the victims of recent mass shootings in the U.S. during a vigil held at the Temecula Duck Pond, Aug. 9, 2019.

In a 94-page ruling, U.S. District Court Judge Roger T. Benitez, an appointee of then-President George W. Bush, wrote, "Like the Swiss Army knife, the popular AR-15 rifle is a perfect combination of home defense weapon and homeland defense equipment. Good for both home and battle, the AR-15 is the kind of versatile gun...