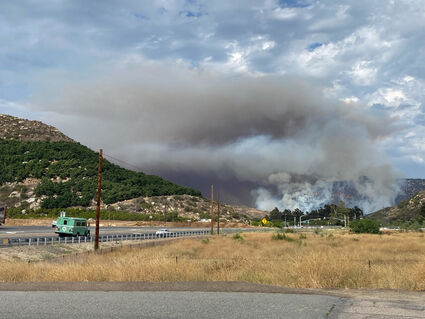 A fire truck races to the scene of the Mesa Fire in Pala, Wednesday, June 23.

A blaze that charred 350 acres erupted for unknown reasons shortly after 2 p.m. Wednesday, June 23, off state Route 76, about a mile west of Pala Temecula Road in Pala near Couser Canyon.

As firefighters worked to corral the blaze, known as the Mesa Fire, authorities shut down the state highway between Horse Ranch Creek Road and Pala Casino about 4 miles to the east.

Due to the "dangerous rate of spread" evacuation warnings were issued with temporary evacuation points opened at Valley Center High School and the I-15 and State Route 76 Park and Ride.

Cal Fire was the lead agency and called...