Over 15 million Americans have COPD; equal amount estimated to be undiagnosed 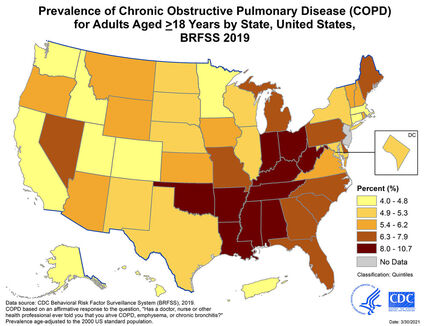 This chart shows the prevalence of COPD by state in the U.S. The Centers for Disease Control and Prevention refer to these as the "hot pockets" of COPD sufferers.

COPD, formally known as Chronic Obstructive Pulmonary Disease, is the fourth leading cause of death and a major cause of disability in the United States, according to the National Heart, Lung, and Blood Institute.

Columbia University has stated "over 15 million Americans have been diagnosed with COPD. Evidence suggests that another 15 million have COPD but remain undiagnosed."

This is a disease that deserves a look back in time as a lot has changed and evolved with it. COPD is one of many conditions that has been studied over time and what has been...