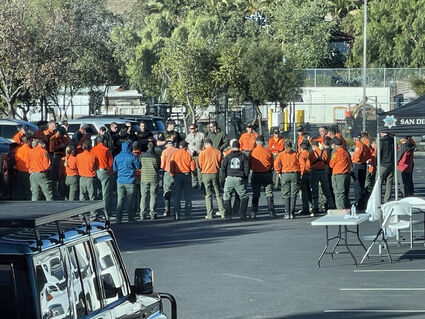 About 50 Search and Rescue crew gather to continue search for Elena Roy who has been missing since Nov. 3, 2021.

Dozens of San Diego Sheriff Search and Rescue (SAR) volunteers were gathered at Fallbrook Public Utility District this morning at 8 am getting organized for the day to continue the search for Elena Roy.

Sgt. Joe Jarjura, who was in charge, said, "These Search and Rescue [workers] are all volunteers. They don't get paid to do any of this."

Homicide was also on the scene, as well as K-9s, according to private detective Tony Campbell, who is on the scene for Village News. He reported there was a large effort going on in DeLuz with dozens of SAR volunteers, motorcycles, drones, dogs, and four-wheelers. 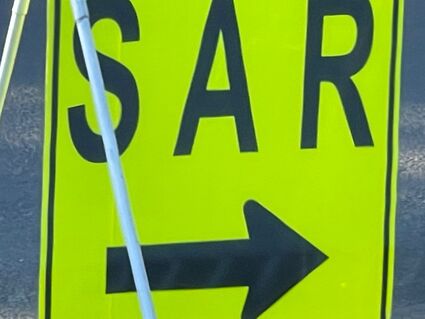 Search and Rescue signage pointing dozens of people to the FPUD parking lot.

Sheriff's deputy Yunk was posted at the Santa Margarita trailhead. He said he thought there were probably 50 to 60 volunteers out searching. Another unnamed deputy was working with a drone in the background.

Elena Roy has been missing since November 3rd when it is believed she walked away from her home. She was reported to be seen on Main Ave. in Fallbrook at about 1:30 that same day, which is the last verified report of her.

Hundreds of volunteers and family have searched for the last three weeks in the local fields, hills, ravines, and creeks along the highways, and areas where she's walked to before with no success. Elena is 84 years old as of last week and is reported to be an avid walker.

This is a developing story that will be updated throughout the day.