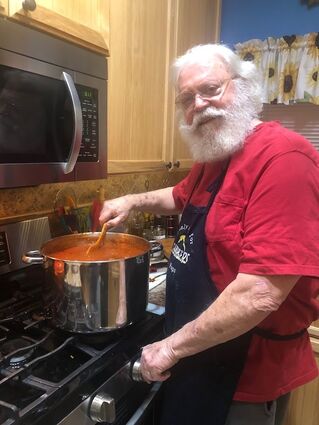 On Nov. 7, 2021, Earl Desmond Dahlen passed away peacefully in his sleep after watching his beloved Chargers beat the Eagles 27-24. He was 77 years old.

Earl was born in Hartford, Connecticut on Oct. 16, 1944, before moving out west and growing up in El Monte, Phoenix and California. It was during high school in Arizona that he developed his lifelong love of all things football and hot rods. This love of hot rods made Earl a formidable drag racer at the Carlsbad Raceway in the 1960's. Later in life, Earl was particularly proud of his 1955 Chevy Nomad and 1947 Woodie restorations.

Earl went on to receive his teaching credential in Industrial Arts and completed a Master of Fine Arts in Industrial Education from CSU Long Beach where he refined his craft as a woodworking artisan. Earl used the love of his craft to inspire students as a teacher at James E. Potter Junior High for 29 years. Earl helped promote his student's work by submitting them for competition with the San Diego County Fair year after year and winning numerous awards.

Additionally, he was proud to be certified as an arbitrator for the Better Business Bureau. After nearly three decades in education, Earl launched his successful woodworking business The Earl of Woods where he specialized in antique restoration, custom woodworking, designing, construction, and refinishing.

Earl was frequently loud, opinionated, and generous to a fault. A notable bon vivant who frequently sought out the best food and wine, Earl became a member of the Orange County Wine Society and enjoyed his membership in several wineries across California. And along with a love of food and wine, Earl enjoyed throwing large parties at his home in Fallbrook. He also enjoyed his weekly brunch with friends that he affectionately called the "Old Farts Breakfast Club."

Family gatherings were extremely important to Earl as were the holidays. In later years, Earl grew out a white beard and spread Christmas cheer as Santa Claus at holiday events and handed out hundreds of candy canes to awestruck children.

Earl was a loyal friend who fiercely loved his family; who never missed an opportunity to share his knowledge, kindness, opinion, recipe, or anecdote; who sought out the best in everything while looking for the best in everyone. He will be missed.

In accordance with Earl's wishes, Earl's ashes will be scattered at sea as part of a small, private ceremony. In remembrance of Earl, the family asks that you raise a glass in Earl's memory.