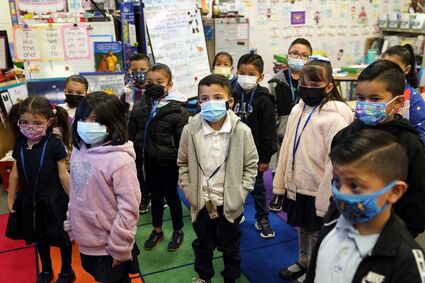 Kindergarteners wear masks while listening to their teacher amid the COVID-19 pandemic at Washington Elementary School on Jan. 12, 2022, in Lynwood, Calif. Monday, Feb. 14 even as other Democratic governors around the country have dropped them in recent weeks.

Gov. Gavin Newsom delayed a closely watched decision on lifting California's school mask mandate Monday, even as other Democratic governors around the country have dropped them in recent weeks.

While many Californians will be able to remove masks in most indoor settings starting Tuesday, schoolchildren and teachers will have to wait. Newsom had flagged Monday as the day to watch for a revision regarding schools, then sent the state's top health official to deliver the message of a delay.

"The message today, which I hope is clear, is today a change isn't being made," California Health and Human Services Secretary Dr. Mark Ghaly said in an online announcement. Ghaly said his department will reassess on Feb. 28 whether the rule should change.

"This is not a decision we take lightly, it is not a decision that is a hasty one," Ghaly said, noting that California's vaccination rates for children are still low and the Centers for Disease Control and Prevention still recommends masks in schools.

The non-announcement came a day before California lifts its mask mandate for most indoor settings for vaccinated people. As of Tuesday, unvaccinated people will still be required to be masked indoors, and everyone - vaccinated or not - will have to wear masks in higher-risk settings like public transit and nursing homes. Local governments can continue their own indoor mask requirements, as Los Angeles County health officials announced they would.

It also comes a week after a half dozen other states controlled by Democrats, including Connecticut, Delaware, New Jersey and Oregon, announced plans to end statewide school mask mandates by the end of February or March. They are among a dozen states with such mandates for schools, which have become a lightning rod in districts nationwide.

Newsom, a Democrat, has come under pressure from Republicans and other critics to ease the mandates. He indicated last week that he was ready to ease making rules at schools but the teachers unions were not.

"They just asked for a little bit more time and I think that's responsible and I respect that," Newsom told a news conference last week. "But we also have a date with destiny. We recognize that we want to turn the page on the status quo."

Ghaly said Monday that COVID-19 cases in California have dropped by more than 75% since mid-January, but the state was not yet ready to make masks optional in schools. He declined to answer repeated questions on what role teachers unions played in Monday's decision.

But the teachers' stance was made clear minutes after Ghaly finished speaking, when the powerful California Teachers Association issued a statement praising the "cautious approach to masking."

"We know that masking, strong testing programs and having good school ventilation systems in place have been key to ensuring the stability of in-person learning," the statement from CTA President E. Toby Boyd said, but added that changes "will disrupt and destabilize school communities."

Newsom said last week that one of the sticking points in labor negotiations was the relatively low vaccination rates for children under 12.

Only 28% of 5 to 11-year-olds in California are fully vaccinated, according to the latest state figures, compared to 89% of residents 18 and older.

Ghaly declined to say whether lifting school mask requirements would be tied to specific metrics.

California has had some of the strictest mask and vaccination requirements in the country, with Newsom announcing last October a COVID-19 vaccine mandate for all public and private schoolchildren. That mandate is not expected to take effect until July, pending full federal approval for the shots.

The school mask requirements, in place since July 2020, were key to getting the state's powerful teachers unions to agree to reopen classrooms.

Parents are frustrated, prompting some officials to make their own decisions.

In a suburb of Sacramento, the Roseville Joint Union High School District school board openly defied the state mandate last week with a unanimous vote to start a "mask optional" policy.

At Corona Norco Unified School District in Riverside County, where students and parents recently protested the school mask mandate, the district said it has set up a supervised, outdoor area where students who refuse to mask up can spend the day protesting or doing school work.